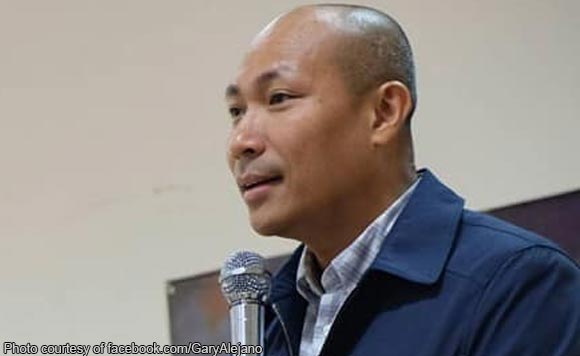 0 335
Share
Want more POLITIKO News? Get the latest newsfeed here. We publish dozens and dozens of politics-only news stories every hour. Click here to get to know more about your politiko - from trivial to crucial. it's our commitment to tell their stories. We follow your favorite POLITIKO like they are rockstars. If you are the politiko, always remember, your side is always our story. Read more. Find out more. Get the latest news here before it spreads on social media. Follow and bookmark this link. https://goo.gl/SvY8Kr

Magdalo party-list Rep. Gary Alejano is siding with the majority bloc in its feud against Budget Secretary Benjamin Diokno regarding the alleged anomalies in the budget.

Alejano on Tuesday urged Diokno to attend the House rules committee’s investigation into the 2018 and 2019 national budgets, which will be held on January 3 in Naga City.

In a statement, the opposition lawmaker said Diokno is “the most fitting” person to answer questions about the budget since he heads the Department of Budget and Management.

He said Malacañang, which recently ordered Diokno to snub the House probe, should see it as a way of promoting transparency.

“If the President is true to his anti-corruption campaign, then he should let Secretary Diokno to appear before the House, clear his name, and help us smoke out the crook behind all of this. Dapat nga’y matuwa pa ang Malacañang dito dahil pagkakataon ito upang patunayang mali ang kanilang mga kritiko,” Alejano said.

Diokno is accused of illegally inserting P75 billion into the proposed budget of the Department of Public Works and Highways in 2019 without the knowledge of DPWH Secretary Mark Villar or President Rodrigo Duterte.

He also allegedly used his influence to approve P10-billion worth of road and flood control projects in Casiguran and Sorsogon as a favor to his daughter, who is married to the son of Sorsogon Vice Governor Ester Hamor.

Alejano said Diokno should have no qualms attending the investigation if he has nothing to hide.

“I agree that Secretary Diokno is a man of integrity, until proven otherwise. However, this rather uncooperative stance over the House investigation might be construed as covering up a serious anomaly. Kung walang itinatagong lihim o pinoprotektahang interes, taas-noong mahaharap ni Sec. Diokno ang mga alegasyong ito,” he said.