Winnie Castelo sticks to the Fighting Maroons til the end 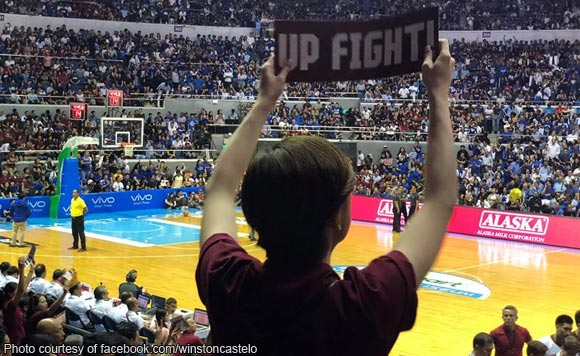 0 277
Share
Want more POLITIKO News? Get the latest newsfeed here. We publish dozens and dozens of politics-only news stories every hour. Click here to get to know more about your politiko - from trivial to crucial. it's our commitment to tell their stories. We follow your favorite POLITIKO like they are rockstars. If you are the politiko, always remember, your side is always our story. Read more. Find out more. Get the latest news here before it spreads on social media. Follow and bookmark this link. https://goo.gl/SvY8Kr

He remains proud of UP despite their loss.

Congressman Winston Castelo of Quezon City is still damn proud to be an Iskolar ng Bayan even after his alma mater succumbed to the Ateneo Blue Eagles during the best-of-three series match for men’s basketball.

It’s a feat in itself for the Maroons’ basketball team, which has been a cellar-dweller until their recovery and resurgence over the past few years.

Castelo made sure to watch the second game live at the Araneta Coliseum on Wednesday, Dec. 5, which saw Ateneo take home the finals trophy at 99-81. Still, he believes the Diliman team should stand proud.

He even shared the experience with Trade Secretary Ramon Lopez, also a proud UP alumnus.