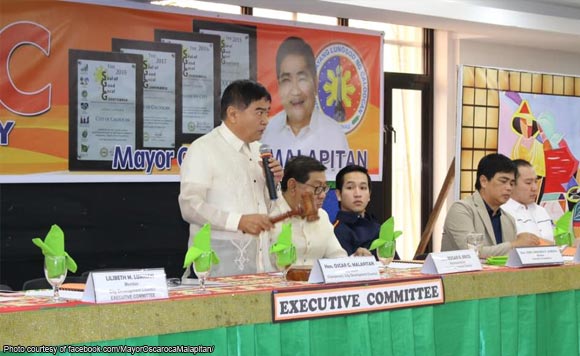 0 738
Share
Want more POLITIKO News? Get the latest newsfeed here. We publish dozens and dozens of politics-only news stories every hour. Click here to get to know more about your politiko - from trivial to crucial. it's our commitment to tell their stories. We follow your favorite POLITIKO like they are rockstars. If you are the politiko, always remember, your side is always our story. Read more. Find out more. Get the latest news here before it spreads on social media. Follow and bookmark this link. https://goo.gl/SvY8Kr

Caloocan Mayor Oscar Malapitan has vowed to continue working for the city’s improvement as his term continues.

In a speech during the third City Development Council (CDC) General Assembly Friday, Malapitan urged local officials to work with him to make Caloocan a progressive city.

“We can’t turn our dreams into reality without dedication and unity. I am very thankful for the unwavering support of the Sangguniang Panlungsod, departmend heads, and mostly, to all the Caloocan residents,” he said.

“We will continue doing programs and services for the benefit and welfare of our city and its people,” Malapitan added.

The assembly was attended by the Executive Committee of the City Development Council, city department heads, and officials from the city police, court, jail, schools division office, and barangays.