Otis Bridge in Manila reopens ahead of schedule 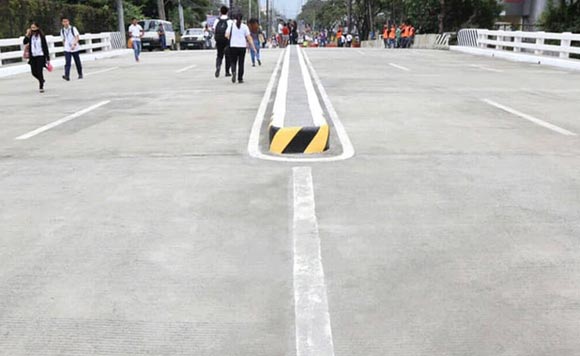 The newly-reconstructed, strengthened and widened Otis Bridge along P.M. Guazon Street, Paco, Manila was reopened to motorists on Tuesday, two months earlier than its target completion.

“The original deadline is February 2019, but it was finished first week of December. It will decongest traffic in the area and this is part of President Duterte’s plan to decongest Metro Manila and I believe before the end of his term, his dream will become a reality,” Department of Public Works and Highways (DPWH) Secretary Mark Villar said in an interview.

For the meantime, the bridge will be opened only for light vehicles.

The reconstruction project amounting to PHP33.58 million started following its partial collapse in June 2018. It was slated for completion in February 2019.

“This bridge formerly has four lanes, now it has six lanes. It’s wider, more resilient, it’s a very strong bridge. This will be here for many many decades to come. This is a reflection of the work done by our President,” Villar added.

The bridge’s maximum allowable weight was also increased from 15 tons to 20 tons to accommodate more motorists in the area.

With its completion, the 23-linear meter Otis Bridge with 172-linear meter approach road on both sides will ease traffic congestion in Osmeña Highway, Quirino Avenue and United Nations Avenue.

It will also serve as a link of vehicles traversing South Manila to North Manila as well as the cities of Quezon, Caloocan and Mandaluyong.