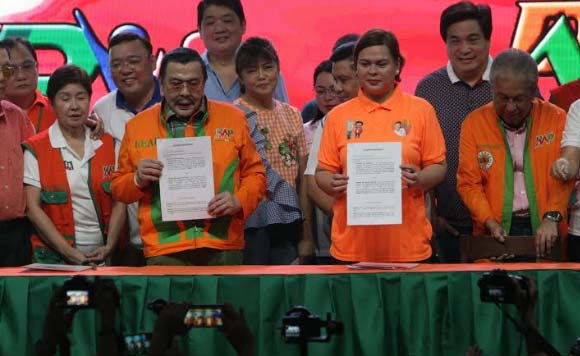 Davao City Mayor Sara Duterte’s party, Hugpong ng Pagbabago, has gained another ally ahead of the 2019 elections in the party of Manila Mayor Joseph Estrada, the Pwersa ng Masang Pilipino.

The two parties formalized on Monday their partnership at a jampacked venue in Manila.

In his opening remarks, Estrada said he was honored to join forces with Duterte.

“The alliance we are formalizing recognizes our intention to cooperate and unite on behalf of our parties, for the benefit of all those we serve now and in the future…karangalan namin na tawagin kayong aming kaibigan, at ngayon ay kapanalig,” he said.

Among the politikos who joined Estrada and Duterte at the celebration of their alliance were the Manila mayor’s son, Jinggoy Estrada, former presidential spokesperson Harry Roque and Ilocos Norte governor Imee Marcos. All of them are running for senator.

Meanwhile, Estrada is running for a third and last term as mayor alongside former Manila congressman Amado Bagatsing.