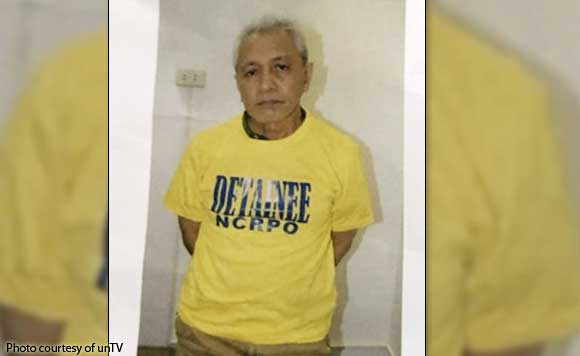 The Quezon City Police District (QCPD) on Monday denied claims of the wife of National Democratic Front (NDF) consultant Vicente Ladlad that her husband’s ATM card was among the items seized in a raid, which resulted in the latter’s arrest last week.

“We would like to reiterate that the Automated Teller Machine (ATM) card of Communist Party of the Philippines Central Committee Member and Head of its National United Front Commission, Vicente Ladlad, was not among the confiscated items during the implementation of a Search Warrant for violation of Republic Act 10591, or the Comprehensive Law on Firearms and Ammunition last November 8, 2018 in Novaliches, Quezon City,” Chief Supt. Joselito T. Esquivel Jr., QCPD director, said in a statement.

The QCPD chief challenged Ladlad’s camp to file a formal complaint, which he said, will give way for an investigation on the unauthorized withdrawal from Ladlad’s Landbank ATM card.

Esquivel also advised Ladlad’s wife, Fides, to cooperate with the police instead, by giving details of the incident to enable them to make a formal request for a record of transactions involving the ATM card from the bank.

“As of today, it is unfortunate that Ladlad’s wife keeps on throwing allegations but does not want to file formal complaints. She also previously claimed that her cellphone was stolen by officers, only to find out that it was in her lawyer’s possession,” Esquivel said.

“With the filing of a formal request by Ladlad’s Camp, we could also request for the bank’s closed circuit television (CCTV) recordings to help us establish the identity of the person in the alleged unauthorized bank withdrawal,” he stressed. (PNA)