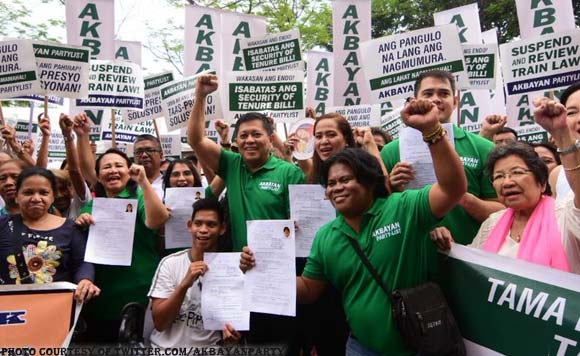 0 8,774
Share
Want more POLITIKO News? Get the latest newsfeed here. We publish dozens and dozens of politics-only news stories every hour. Click here to get to know more about your politiko - from trivial to crucial. it's our commitment to tell their stories. We follow your favorite POLITIKO like they are rockstars. If you are the politiko, always remember, your side is always our story. Read more. Find out more. Get the latest news here before it spreads on social media. Follow and bookmark this link. https://goo.gl/SvY8Kr

MANILA – It looks like Akbayan Partylist has followed the footsteps of their compatriots in the Liberal Party-led opposition for not using their once famous “yellow” trademark.

Led by Rep. Tom Villarin, Akbayan members and supporters went to the Palacio del Gobernador in Intramuros, Manila where the Commission on Elections (COMELEC) is holding office, last October 15 to file the partylist group’s certificate of candidacy (COC).

Aside from Sen. Risa Hontiveros and former Commission on Human Rights chair Etta Rosales, the personalities surrounding the opposition group were almost the same except for one thing–from their usual yellow-themed campaign which they previously used during the 2007, 2010, 2013, and 2016 polls, it seems that Akbayan has now switched its battle color to green.

The partylist group has yet to issue a statement over their supposed color-switch but former First Gentleman Jose Miguel “Miguel” Arroyo last Wednesday poked fun on the LP-led political opposition for not using the “yellow brand” of the previous administration.

“How come the LPs did not wear yellow shirts when filing their respective candidacies?” said Arroyo.

Arroyo taunted the eight-man senatorial slate of the opposition, adding that they might be afraid of being tagged as “dilawan” in next year’s midterm elections so they decided to drop the “yellow branding” on their persona.

Meanwhile, Villarin will remain as Akbayan’s primary nominee in the upcoming 18th Congress follwed by Gio Tingson, and Doris Obena.