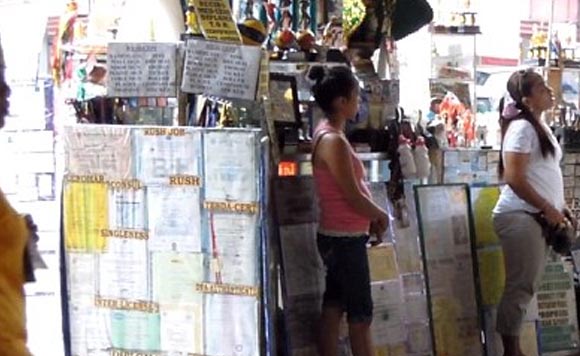 The National Bureau of Investigation (NBI) has arrested nine people for producing and selling fake government-issued IDs such as Land Transportation Office (LTO) driver’s licenses and other documents during a series of entrapment operations in September.

Acting on a report by the LTO, NBI agents of the Anti-Graft Division (AGD) on Sept. 12 conducted its first entrapment operation along C.M. Recto Avenue where government IDs and other public documents were being falsified in plain sight.

An undercover NBI-ADG agent was approached by a certain Paul Cabrera, who offered falsifying an LTO driver’s license for P1,000 and a Philippine passport for P3,500.

An entrapment operation immediately ensued and search warrants were served.

The NBI also seized paraphernalia such as computer sets, printers, scanners, laminating machines, and dry seal, among others.

They were brought to the NBI Headquarters in Manila and were charged with the violation of the “New Passport Act of 1996” and the “Land Transportation and Tariff Code”.

The compound, which is owned by Minda delos Santos, is being rented to a certain “Jong” and “Jennifer”.

They will be charged with multiple counts of violation the “Land Transportation and Tariff Code.” Barangay officials will also be investigated by the NBI for possible administrative or criminal liability for their failure to prevent the proliferation of these illegal activities in their jurisdiction.

LTO chief Edgar Galvante thanked the NBI and the Department of the Interior and Local Government (DILG) for bringing the perpetrators to justice and awarded operatives with Certificates of Appreciation.

“Along this line, the LTO will support and rally behind the DILG on any legal action that he may initiate against barangay officials who deliberately tolerate the existence of business establishments engaged in the production of fake documents,” wrote Galvante in a letter addressed to DILG Undersecretary Martin Dino.