Never give up! Marcy Teodoro wants century-old acacia tree replanted after being felled by tornado 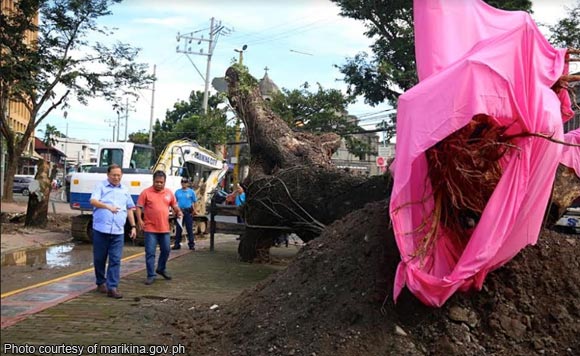 0 689
Share
Want more POLITIKO News? Get the latest newsfeed here. We publish dozens and dozens of politics-only news stories every hour. Click here to get to know more about your politiko - from trivial to crucial. it's our commitment to tell their stories. We follow your favorite POLITIKO like they are rockstars. If you are the politiko, always remember, your side is always our story. Read more. Find out more. Get the latest news here before it spreads on social media. Follow and bookmark this link. https://goo.gl/SvY8Kr

Marikina City Mayor Marcelino Teodoro wants a century-old acacia tree back on the ground after it was felled by a tornado that struck Barangay San Roque on the eve of Typhoon Ompong’s landfall.

Last week, Teodoro visited the fallen century tree located near the Shoe Museum along J.P Rizal Street to check on efforts to rehabilitate it.

A pink cloth has been placed over the tree’s roots and some of its branches as local government personnel continuously sprinkled it with water.

According to the city government, a root growth stimulant has also been applied to the tree to help keep it alive while experts are figuring out a way to replant it.

Putting the tree back on the ground is estimated to take three weeks.

Two century-old trees were felled due to the tornado which happened on September 14. A part of the Shoe Museum was destroyed because of the incident.

The other century-old tree was already replanted.