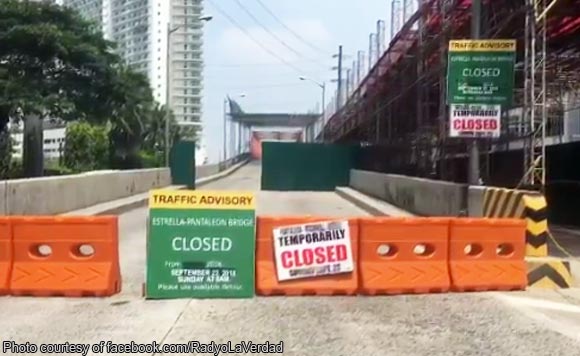 The Estrella-Pantaleon bridge is open again to traffic after motorists complained about the gridlock its closure caused starting Sunday.

The Department of Public Works and Highways (DPWH) has deferred the reconstruction of the bridge to 2019 due to public clamor.

“[D]ue to public clamor and apprehension of the business circle that the timing and closure will cause possible huge economic loss specially this coming holiday season, we are constrained to defer the implementation of the project…,” Castillo said.

The DPWH official, however, clarified that the DPWH and the project contractors, China Road and Bridge Corporation and CCCC Highways Consultants Co. Ltd., are already prepared to demolish the existing two-lane bridge and construct a new one.

Authorities closed the Estrella-Pantaleon bridge over the weekend to start the construction of a four-lane bridge.

The closure led to worse traffic along Edsa and alternate routes.