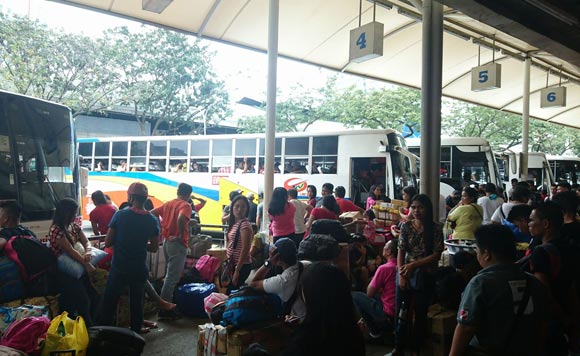 0 1,335
Share
Want more POLITIKO News? Get the latest newsfeed here. We publish dozens and dozens of politics-only news stories every hour. Click here to get to know more about your politiko - from trivial to crucial. it's our commitment to tell their stories. We follow your favorite POLITIKO like they are rockstars. If you are the politiko, always remember, your side is always our story. Read more. Find out more. Get the latest news here before it spreads on social media. Follow and bookmark this link. https://goo.gl/SvY8Kr

A lawmaker from the Bicol region wants Congress to look into the state of provincial bus terminals as the country marks the unofficial start of the Christmas season this September.

Batocabe said he received numerous complaints regarding the condition of bus terminals heading to provinces in Southern Luzon.

“Many passengers complain that the bus terminals are usually overcrowded, especially during peak seasons. There are also reports that bus companies or terminals do not allow ticket reservations, so what happens is that passengers crowd the terminals to get tickets,” he said.

Around 3,568 buses ply the Manila-South Luzon route, with their destinations reaching the Bicol region.

Majority of the terminals of the South Luzon-bound buses are located at the Aranet Center-Cubao, Edsa-Cubao, Ermita, and Buendia.

Aside from the crowded terminals, Batocabe said he has received various complaints about terminal fees and baggage insurance fees that have no clear guidelines and no proper authorization from the Land Transportation Franchising and Regulatory Board.

“Many of our commuters have complained about certain terminal fees and/or baggage insurance fees which only cover loss of baggage from the terminal to the bus. I am constrained to ask if this collection of fees is authorized by the LTFRB and if there are clear guidelines. If not, I would presume that these are illegal charges,” he said.