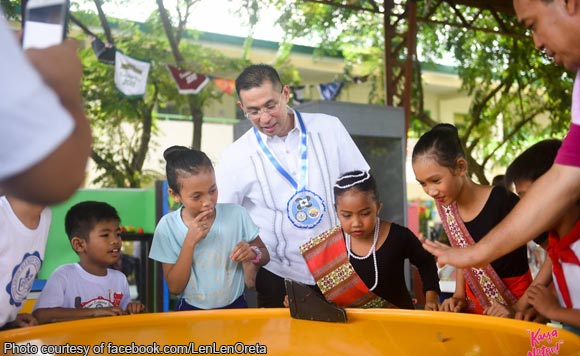 0 589
Share
Want more POLITIKO News? Get the latest newsfeed here. We publish dozens and dozens of politics-only news stories every hour. Click here to get to know more about your politiko - from trivial to crucial. it's our commitment to tell their stories. We follow your favorite POLITIKO like they are rockstars. If you are the politiko, always remember, your side is always our story. Read more. Find out more. Get the latest news here before it spreads on social media. Follow and bookmark this link. https://goo.gl/SvY8Kr

Malabon City Mayor Antolin “Len Len” Oreta experienced what it was like to look at the world through a kid’s eyes when the Department of Science and Technology (DOST) held its “traveling” science fair at the Malabon Elementary School last month.

Together with wife Melissa, Oreta tried out various inventions to experience scientifically-proven tricks.

The mayor’s body appeared to be missing when he tried out the invention called “Head on a Platter,” which featured mirrors on the side of a table.

In a Facebook post, Oreta said the science fair organized by DOST had the “lakas maka-bagets” vibe.

The fair, which was held at the Malabon Elementary School from August 29 to 31, was held by DOST in partnership with the Philippine Foundation for Science and Technology and Department of Education.