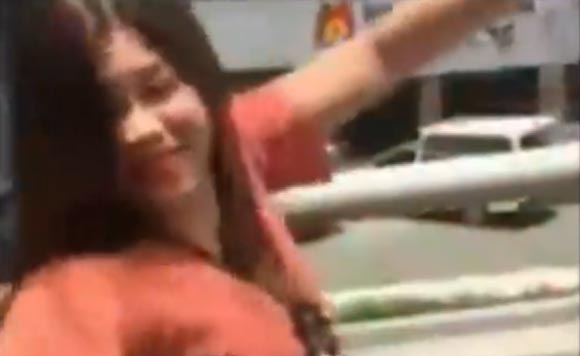 “Kung sino ka man, magpunta ka dito humingi ka ng paumanhin. Sabihin mo sa buong madla na huwag kang gayahin. Napakasama po yan, lalo na kung may mga batang nanonood. ‘Di po maganda ‘yan (Whoever you are, you report to us and make an apology. Tell the public that they should not imitate you. This is a bad example, especially to kids who might be watching. This is not good),” MMDA General Manager Jojo Garcia said in a press briefing Thursday.

Garcia urged the public not to do the viral dance challenge as it puts the safety of motorists and pedestrians at risk.

The MMDA is coordinating with the National Bureau of Investigation (NBI) in locating the girl who was identified as a certain Micha Anne Gabuten.

Gabuten uploaded the video on Aug. 28 but it was deleted after it became viral. Her social media accounts have also been deactivated.

Garcia said Gabuten will also be slapped with a fine of PHP500 for violating the Anti-Jaywalking Act while the driver of the vehicle will be fined PHP500 for reckless driving.

If found to be the one taking the video, the driver will likewise be charged with violation of the Anti-Distracted Driving Act.

The MMDA earlier warned that motorists participating in the “Kiki Challenge” will be slapped with a fine of PHP2,500. Their licenses will also be confiscated and will undergo a driving seminar.

Meanwhile, the NBI Cybercrime Division and its Digital Forensics office have begun the process of identifying the girl in the “Kiki Challenge” dance video.

“We will use the full force of the NBI to establish the identity and locate the girl in the video,” said Deputy Director Ferdinand Lavin, NBI spokesperson.

The Department of Transportation said the “Kiki Challenge” violates the Anti-Distracted Driving Act, which entails fines ranging from PHP5,000 to PHP15,000. (With reports from Christopher Lloyd Caliwan/PNA)