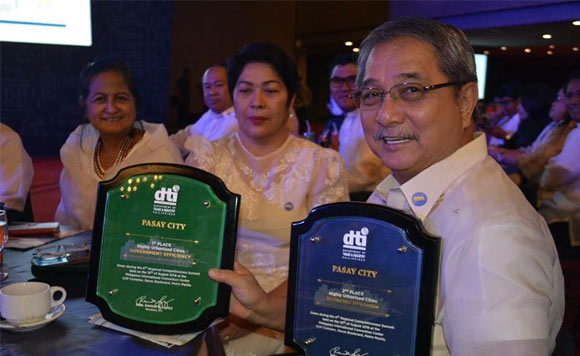 0 1,444
Share
Want more POLITIKO News? Get the latest newsfeed here. We publish dozens and dozens of politics-only news stories every hour. Click here to get to know more about your politiko - from trivial to crucial. it's our commitment to tell their stories. We follow your favorite POLITIKO like they are rockstars. If you are the politiko, always remember, your side is always our story. Read more. Find out more. Get the latest news here before it spreads on social media. Follow and bookmark this link. https://goo.gl/SvY8Kr

Mayor Tony Calixto added another feather to his cap when the city government of Pasay was hailed first in Government Efficiency by the Department of Trade and Industry.

The CMCI defined Government Efficiency as the “quality and reliability of government services and government support for effective and sustainable productive expansion.”

Among the indicators considered in determining the winners were the capacity of health services and schools; compliance to national directives for LGUs and security.

Pasay City also ranked as the CMCI 2018 2nd Place for Economic Dynamism as it has “create(d) stable expansion of business and industries and higher employment.”

Calixto was pleased with the recognition, especially since Pasay city ranked third in overall competitiveness.

“We are very happy with the performance of the Travel City Pasay. This only proves that our City has developed and progressed rapidly during the last few years,” he said.