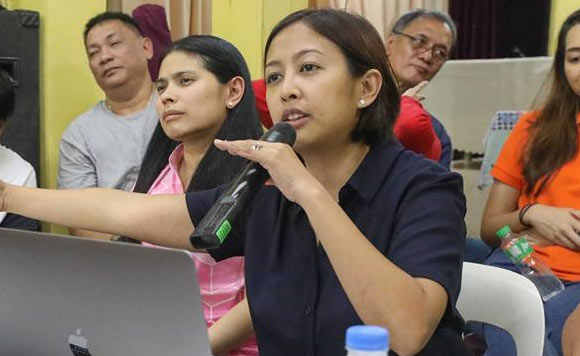 0 9,768
Share
Want more POLITIKO News? Get the latest newsfeed here. We publish dozens and dozens of politics-only news stories every hour. Click here to get to know more about your politiko - from trivial to crucial. it's our commitment to tell their stories. We follow your favorite POLITIKO like they are rockstars. If you are the politiko, always remember, your side is always our story. Read more. Find out more. Get the latest news here before it spreads on social media. Follow and bookmark this link. https://goo.gl/SvY8Kr

Makati Mayor Abby Binay has issued a stern warning to business owners against engaging in the illegal drug trade as she urged the Makati police to pursue the charges filed against 31 employees of a bar in Brgy. Poblacion who were arrested during an anti-illegal drugs operation on August 11.

Binay said drug trade should not be part of any business in Makati City.

“I am warning business owners in Makati, their employees and patrons who are involved in illegal drugs: You have no place here in Makati! We are prepared to impose the full force of the law, no matter who you are or whom you know. We will ensure you are justly punished,” she said.

Out of the 31 employees arrested at the Time in Manila Bar along Makati Avenue, Binay noted that only two were Makati residents.

The others who were arrested, including the bar manager, had residential addresses in the cities of Pasay, Quezon, Taguig, Las Piñas, Parañaque, Caloocan, Pasig, Manila, and in the provinces of Cavite and Rizal.

Makati police chief S/Supt. Rogelio Simon said cases of violation of Sections 5, 6, 7 and 11 of Article II of R.A. 9165 have been filed against the suspects last August 14.

Also confiscated at the scene were a caliber 38 revolver with five rounds of ammunition, and drug paraphernalia.