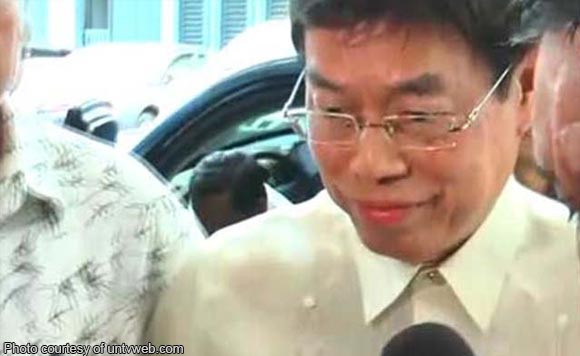 Acting Presiding Judge Gina Bibat-Palamos of the Makati Regional Trial Court (RTC) Branch 65 ordered the Bureau of Immigration (BI) to prevent Lim from leaving the country when she granted the motion filed by Department of Justice (DOJ) prosecutors.

“The Hold Departure Order shall remain effective until otherwise ordered and cancelled by the court,” read the two-page order dated August 17.

Espinosa is in the custody of the National Bureau of Investigation (NBI), while Adorco is with the PNP. Lim remains at large.

The respondents are facing two counts of conspiracy to commit illegal drug trade in violation of Section 26(b) in relation to Section 5, Article II of Republic Act No. 9165, the Comprehensive Dangerous Drugs Act of 2002.

Palamos set the arraignment of all of the accused on August 28.

Apart from the two charges, state prosecutors also filed charges against Espinosa, Adorco, and Malindagan, alleged drug supplier Lovely Impal, and convicted drug lord Peter Co after a DOJ panel of prosecutors found probable cause to indict them based on the complaint of the PNP-Criminal Investigation and Detection Group (CIDG).

The charges filed last July 25 are two counts of conspiracy to commit illegal drug trade at the Manila RTC.

Meanwhile, NBI operatives will join the hunt for Lim.

“The NBI joins the entire law enforcement in the hunt down for Peter Lim as ordered by the Court via Arrest Warrant,” NBI Deputy Director Ferdinand Lavin told reporters.

The complaint filed by the PNP-CIDG was initially turned down on Dec. 20, 2017 by the DOJ under then secretary Vitaliano Aguirre II but was later reinstated. (With reports from Benjamin Pulta/PNA)