Hands on! Bayani Fernando helps out in post- ‘Habagat’ cleanup 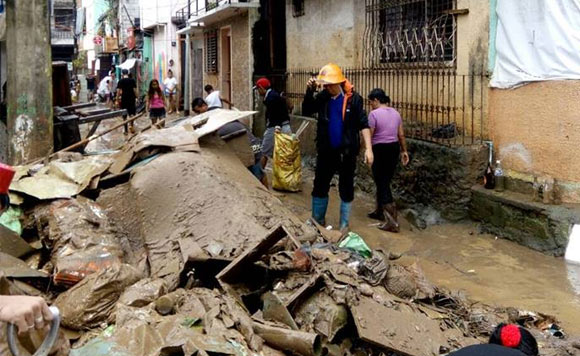 0 728
Share
Want more POLITIKO News? Get the latest newsfeed here. We publish dozens and dozens of politics-only news stories every hour. Click here to get to know more about your politiko - from trivial to crucial. it's our commitment to tell their stories. We follow your favorite POLITIKO like they are rockstars. If you are the politiko, always remember, your side is always our story. Read more. Find out more. Get the latest news here before it spreads on social media. Follow and bookmark this link. https://goo.gl/SvY8Kr

While other officials of Marikina City were in evacuation centers giving aid to residents affected by the monsoon rains over the weekend, Congressman Bayani Fernando was in the streets cleaning up debris.

Clad in a jacket, boots and hard hat, the congressman was in full work mode as he helped picked up the trash and clear the muddied debris on the streets.

Fernando has plenty of experience in clearing operations since he used to head the Metro Manila Development Authority (MMDA).

Over 20,000 residents of Marikina City had to leave their homes at the height of the monsoon rains last Saturday since the water level at Marikina River rose to as high as 20.4 meters.

Local officials have described the downpour as being similar to 2009’s Typhoon Ondoy, which killed close to 80 people in the city.