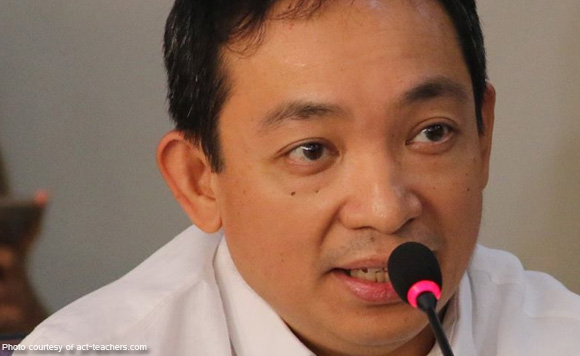 0 3,771
Share
Want more POLITIKO News? Get the latest newsfeed here. We publish dozens and dozens of politics-only news stories every hour. Click here to get to know more about your politiko - from trivial to crucial. it's our commitment to tell their stories. We follow your favorite POLITIKO like they are rockstars. If you are the politiko, always remember, your side is always our story. Read more. Find out more. Get the latest news here before it spreads on social media. Follow and bookmark this link. https://goo.gl/SvY8Kr

ACT Teachers Representatives Antonio Tinio and France Castro criticized the Duterte administration for cutting the budget for education despite the promise that the Tax Reform for Acceleration and Inclusion (TRAIN) would provide more money for social services.

“In the midst of the onslaught of TRAIN that caused the record high 5.7 percent inflation rate, the proposed 2019 budget will have cuts in agencies providing frontline services for the people. The budget for the Department of Education will slashed by 9.94%, while the Commission on Higher Education will have an 0.18% cut. The ordinary Filipino people have been paying more taxes because the Duterte administration promised that the TRAIN would provide more for social services but the budget for education was actually slashed in the 2019 proposed budget,” said Tinio in a statement.

The Department of Education revealed its budget briefing that their proposed 2019 budget was not fully considered because a lot of its programs and projects were slashed.

“How can the Duterte administration further defend the regressive TRAIN law when prices of basic goods have skyrocketed while the budget for social services continue to drop? Education workers and students have long been clamoring for higher state subsidy for education and other social services because facilities, buildings, equipment and salaries for government workers who provide frontline services have been inadequate and inaccessible to the people,” said Castro.

DepEd also proposed 5,487 additional positions for non-teaching personnel but DBM only approved 455 positions. Items under Learning Tools and Equipment and Textbooks and other instructional materials were also slashed by P3.68 billion and P1.19 billion respectively. The budget of State Universities and Colleges will also be slashed by 55.1 percent in Capital Outlay while the Commission on Higher Education will have budget cuts in their different scholarship programs. The Higher Education Development Fund will be slashed by 15.5 percent Scholarship Grant for Dependents of Sugar Industry Workers will be cut by 17 percent, the K to 12 transition program will be slashed by 16.3 percent and the CHED Grants to Medical students will not be funded in the proposed 2019 budget

“Teachers continue to endure the perennial problems of overloading, handling multi-grade level classes and large classes, fulfilling various types of paperwork and assuming the roles of clerks, nurses, guidance counselors, and other non-teaching functions in school while struggling to make ends meet with their meager salaries amidst the rising prices of necessity commodities. These budget cuts in education will further overwork teachers, compromise the access and quality of education for the students,” said Castro.