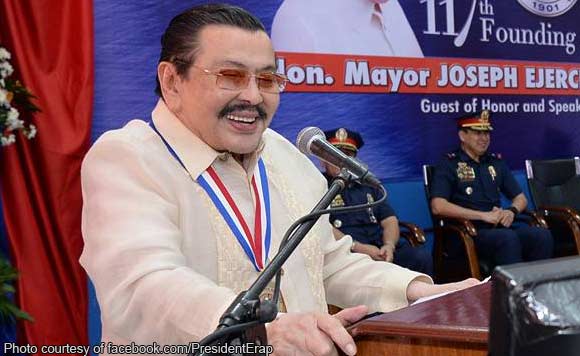 Mayor Joseph “Erap” Estrada is keeping his promise to uplift the lives of his poor constituents.

The veteran politiko on Sunday handed over P5,000 cash aid to 919 budding entrepreneurs in his city to improve their livelihood and life condition.

It was part of the Capital Assistance Program, a livelihood initiative of Estrada when he assumed the post in 2013 to help poor residents to put up their own businesses.

In a ceremony at the San Andres Sports Complex in Malate, the former President said the CAP is an “interest-free and collateral-free capital assistance to support low-income micro-entrepreneurs in the city.”

The city government has already released more than P26 million to almost 7,000 beneficiaries.

“We intend to expand the program and reach to hundreds of Manilenos who want to start their own businesses and improve their lives though the CAP,” he said.

“Those who finished and graduated from our Manila Manpower Development Center, and for those who have no permanent homes and living in Kamada Boys’ Town, they will also receive assistance from the city government,” he added.

Estrada also congratulated all beneficiaries who have repaid the initial seed funds loaned to them by the city government last year and were given a bigger loan to boost their businesses.

“I wish all the beneficiaries to commit their promise to pay the loans granted to them. Hopefully the number of people who have been paying their bills to CAP increase,” the politiko said.

“At present, at least 29 percent of the beneficiaries have already paid. I hope this will increase so that many Manileños can also get assistance from the government,” he added.