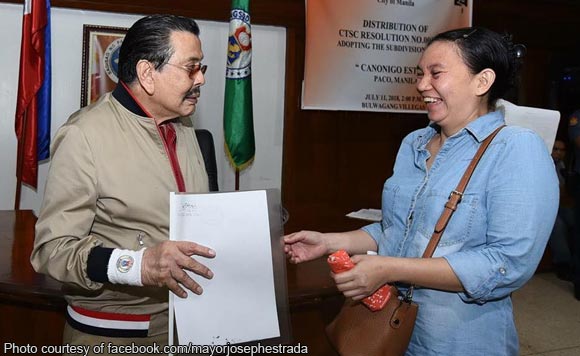 Some informal settlers in Metro Manila will now have a place they can call home.

This after Manila Mayor Joseph “Erap” Estrada awarded land certificates to 111 families that have been illegally occupying privately owned lots on Canonigo St. in Paco, Manila.

“The new land owners of Canonigo Estate may now call themselves true owners of the lot,” Estrada said.

Estrada said the adoption of the subdivision plan by the CTSC will pave the way for the total development of the property, which had long been awaited by its residents.

He then vowed to give lots to more Manileños, especially the poor families, under the Land for the Landless Program the city government has implemented since he assumed the mayoralty in 2013.

Under the program, the awardees are given 20 to 30 years to pay for the lots at affordable rates.