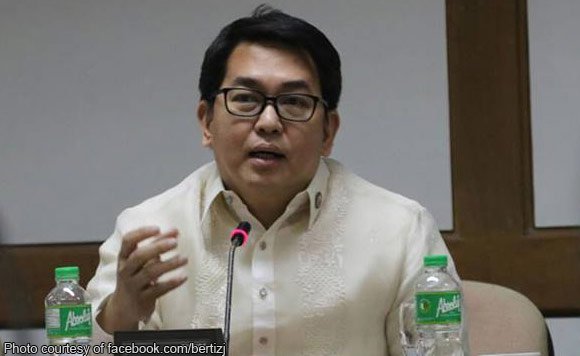 ACTS-OFW Rep. Aniceto Bertiz III has called on the House leadership to look into the alleged illegal recruitment of 200 Filipinos in Micronesia.

“We intend to ascertain whether MV Forever Lucky managed to sneak Filipino job recruits out of the country in the past, before it was caught red-handed,” Bertiz said in a statement.

“Regardless, the ship should be red-flagged by the authorities. From here on, the vessel should be subject to stricter boarding and inspection every time it leaves a Philippine port,” he added.

Forever Lucky is owned by Fahrenheit Co. Ltd., which operates out of the Subic Bay Freeport Zone and supplies construction materials to Micronesia, according to Bertiz.

Bertiz is filing the resolution that will enable the House committees on labor and employment and on overseas workers affairs to investigate the case of alleged illegal recruitment of entertainers, cooks and waiters in Micronesia.

“We understand that Fahrenheit also engages in business in Micronesia. The company may have enlisted the workers for its own operations there, or for the activities of its business partners there,” the politiko said.

Micronesia refers to the Pacific archipelago that includes the U.S. territories of Guam, Northern Mariana Islands and Wake Island.

Forever Lucky was about to leave the Port of Orion in Bataan on July 3 when it was held by the Philippine Coast Guard (PCG), which became suspicious of the ship’s large number of passengers and called in the National Bureau of Investigation (NBI).

The NBI discovered that up to 200 Filipinos without foreign employment papers were simply told to bring their passports and board the ship by July 2 for jobs in Micronesia.

However, only 139 recruits actually showed up with their passports and boarded the ship.

Under the law, Bertiz said illegal recruitment refers to any act of canvassing, enlisting, contracting, transporting, utilizing, hiring, or procuring workers for employment abroad, whether for profit or not, when undertaken by a non-licensee.

Depending on the gravity of the offense, he said those found guilty could face 12 years to life in prison plus a fine of up to P5 million.