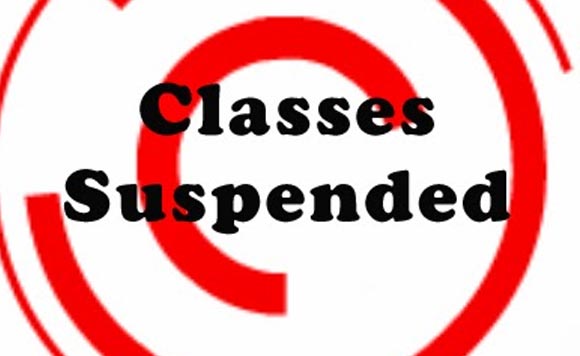 0 2,597
Share
Want more POLITIKO News? Get the latest newsfeed here. We publish dozens and dozens of politics-only news stories every hour. Click here to get to know more about your politiko - from trivial to crucial. it's our commitment to tell their stories. We follow your favorite POLITIKO like they are rockstars. If you are the politiko, always remember, your side is always our story. Read more. Find out more. Get the latest news here before it spreads on social media. Follow and bookmark this link. https://goo.gl/SvY8Kr

Several cities in Manila have suspended classes in both public and private schools as Typhoon Maria is expected to enhance the southwest monsoon or habagat.

Classes in all levels (from preschool to college) in public and private schools have been suspended in the cities of Caloocan, Las Piñas, Malabon, Mandaluyong, Manila, Marikina, Muntinlupa, Navotas, Parañaque, Pasay, Pateros, San Juan, Taguig and Valenzuela.

Quezon City government, meanwhile, found “no compelling reason” to suspend classes on Monday, according to statement issued by Ares Gutierrez, public information officer of the city.

“We advise parents and students to always bring umbrellas and raincoats as a precaution,” Gutierrez said.

He assured that the Quezon City’s Disaster Risk Reduction and Management Office would be on alert 24/7 and monitoring the situation.

The Pasig City government also decided not to suspend classes since the typhoon was not even expected to make landfall.

In Pangasinan, classes from preschool to high school in both public and private have been suspended only in Mangaldan.