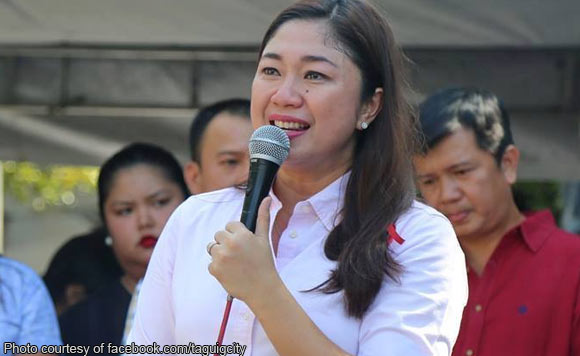 0 11,871
Share
Want more POLITIKO News? Get the latest newsfeed here. We publish dozens and dozens of politics-only news stories every hour. Click here to get to know more about your politiko - from trivial to crucial. it's our commitment to tell their stories. We follow your favorite POLITIKO like they are rockstars. If you are the politiko, always remember, your side is always our story. Read more. Find out more. Get the latest news here before it spreads on social media. Follow and bookmark this link. https://goo.gl/SvY8Kr

Taguig City Mayor Lani Cayetano will not tolerate the behaviour of Councilor Richard Paul Jordan, who has been facing charges of illegal drug possession and theft.

In a statement issued by the Taguig city government Sunday, it said the “law should be allowed to take its course” in the case of the city councilor.

“We do not condone his conduct. “We commend those responsible for the apprehension,” the statement read.

Jordan, who ran under the ticket of Cayetano last elections, was arrested after authorities found in his possession several ecstasy tablets and allegedly stolen items from a casino-hotel last July 3.

He is now facing cases of illegal drug possession and theft and currently detained at the Parañaque police station.

“The law should be allowed to take its course, and we expect nothing less than the firm implementation of the government’s hard line stance against illegal drugs,” the Taguig City government added noting that its leadership “puts its full trust on the government regarding the cases.”

The city government underscored Cayetano’s efforts in combatting illegal drugs in her city.

It stated that she “has led a campaign to end the notoriety of Taguig as an illegal drug hot spot” citing the operation that led to the fall of the “Tinga Drug Syndicate”.

In 2017, a member of the syndicate, Elisa Tinga, was meted out reclusion perpetua and a substantial fine for selling illegal drugs. She is the seventh member of the Tinga Drug Syndicate nabbed by the authorities since 1996, the statement said.

“The case of the councilor is a timely reminder to us that the drug menace is real, and that it continues to exist in our midst despite the unrelenting campaign by the national and local governments,” the city government said.

Taguig said it would continue its own crusade versus illegal drugs. It has espoused a holistic approach dubbed Drug-Free Community Program, which runs on an anti-drug abuse advocacy but also aims to transform drug dependents into productive members of the society.

“To those who are selling or using drugs, it’s not too late: we ask you to avail of our programs before the law catches up with you,” the statement added.