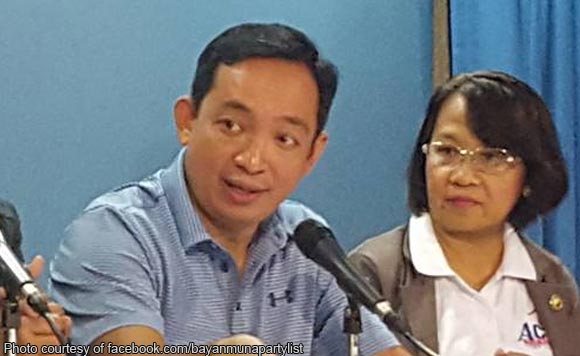 0 1,765
Share
Want more POLITIKO News? Get the latest newsfeed here. We publish dozens and dozens of politics-only news stories every hour. Click here to get to know more about your politiko - from trivial to crucial. it's our commitment to tell their stories. We follow your favorite POLITIKO like they are rockstars. If you are the politiko, always remember, your side is always our story. Read more. Find out more. Get the latest news here before it spreads on social media. Follow and bookmark this link. https://goo.gl/SvY8Kr

Lawmakers from ACT Teachers party-list slammed Malacañang Friday (June 6) for downplaying the rise of inflation rate to a five-year high of 5.2 percent.

Reps. Antonio Tinio and France Castro scored the Palace’s “lack of apprehension” amid the rising prices of basic goods and services.

“Secretary (Harry) Roque saying that there is money going around reflects his lack of empathy and blindness to the conditions of the ordinary Filipino struggling to make ends meat,” Tinio said.

Roque earlier said the jump in inflation rate should not be a cause of concern since it was caused by the increase in Filipinos’ spending power due to the higher take-home pay resulting from the Tax Reform for Acceleration and Inclusion Law’s implementation.

Tinio, however, said most Filipinos worry about the rising prices of basic goods.

He added that TRAIN Law is to blame for the soaring inflation.

“They can try as hard as they can to distort the facts and figures of the poverty threshold and the causes of the inflation hike but the people will not be fooled with their excuses for implementing an anti-poor and regressive tax reform and continuously rejecting the demand of the people for salary increase,” Tinio said.

Castro said ordinary Filipino families have close to nothing to spend for their daily needs since prices of all basic commodities continues to soar due to the high cost brought by TRAIN.

“Wages of the people remain low while prices of all basic commodities have hiked and social services provided by government remain inaccessible to the poorest families,” she said.