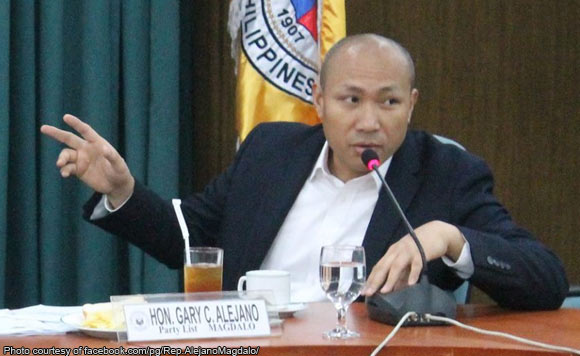 0 614
Share
Want more POLITIKO News? Get the latest newsfeed here. We publish dozens and dozens of politics-only news stories every hour. Click here to get to know more about your politiko - from trivial to crucial. it's our commitment to tell their stories. We follow your favorite POLITIKO like they are rockstars. If you are the politiko, always remember, your side is always our story. Read more. Find out more. Get the latest news here before it spreads on social media. Follow and bookmark this link. https://goo.gl/SvY8Kr

Magdalo Party-list Rep. Gary Alejano said this following the pronouncement of President Duterte that he was taking the blame for the “misencounter” between the military and police in Samar last June 25.

Alejano said there is still a need for an investigation to avoid a repeat of the unfortunate incident and punish those have made a mistake.

“That is correct. Duterte is the Commander-in-Chief of the AFP [Armed Forces of the Philippines] and PNP [Philippine National Police], hence he takes full responsibility. Nonetheless, internal investigations are still necessary to determine what really happened,” the politiko said.

“If there has been any lapse, it should be addressed in future operations. Moreover, if there have been violations in the standard operating procedures, concerned personnel must be meted out with appropriate sanctions,” he added.

Duterte on Friday took full responsibility for the “misencounter” between members of the military and the police in Sta. Rita, Samar that led to the deaths of six police officers. Nine were injured.

“I’d like to tell you that the ultimate blame, fault is on me being the commander-in-chief. I do not want to use the word but ako po ‘yung pinaka [lider] nila,” Duterte said in his speech before soldiers and policemen at a festival in Tacloban City.

Duterte also visited the wake of the six police officers who died and conferred on them posthumously the Order of Lapu-Lapu Rank of Kalasag.

Alejano said those involved should “learn from the mistakes.”

“Let us not bloat the issue and, instead, learn from the mistakes,” he said.

He also said those who died should be allowed “to be buried with dignity” and their bereaved families “must be compensated accordingly.”

“I give my deepest condolences to the families,” he added.