May tama si Duterte! Alejano backs setting of conditions for resumption of peace talks with Reds 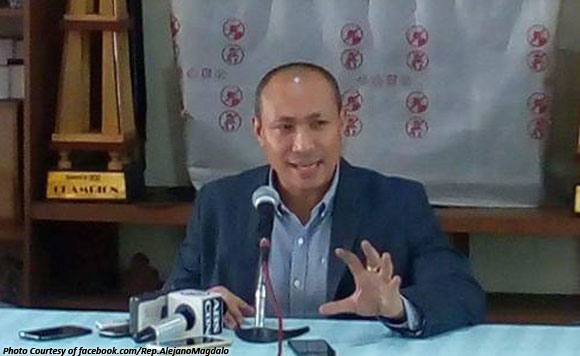 In a rare occurrence, Magdalo party-list Rep. Gary Alejano supports the administration’s decision to lay down conditions before restarting peace talks with communists.

Alejano said the Communist Party of the Philippines – New People’s Army – National Democratic Front (CPP-NPA-NDF) should first show sincerity by unilaterally stopping their offensive against uniformed personnel, as well desisting from their extortion activities or collection of the so-called “revolutionary taxes.”

The former soldier said the NPA should also stop recruiting new rebels and destroying properties in the country side.

Alejano, however, said the government must also do its share by holding off from issuing feisty remarks which “further erode the trust and confidence of the stakeholders in the talks, especially the Filipino people.”

“It is unfortunate that the talks with the CPP-NPA-NDF have been stalled again and public rhetorics from both sides have started to fly in the air instead,” he said.

Duterte called off the resumption of peace talks with the CPP-NPA-NDF on June 28 pending public consultations. CPP founding chairman Jose Maria Sison, however, said the government does not have real plans of returning to the negotiating table and is just putting on a show.

Despite the setback in the peace process, Alejano remains optimistic that an agreement could be reached with the CPP-NPA-NDF.

“I believe it is only through the peace table that real peace could be achieved,” the lawmaker said.