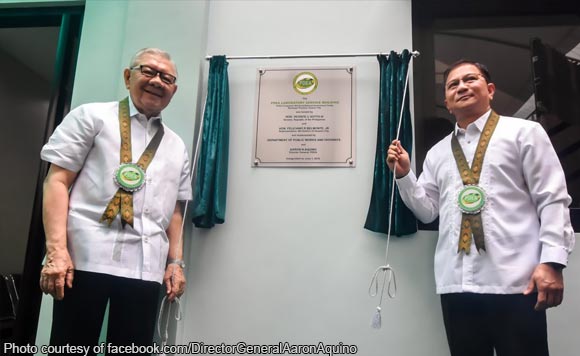 0 1,468
Share
Want more POLITIKO News? Get the latest newsfeed here. We publish dozens and dozens of politics-only news stories every hour. Click here to get to know more about your politiko - from trivial to crucial. it's our commitment to tell their stories. We follow your favorite POLITIKO like they are rockstars. If you are the politiko, always remember, your side is always our story. Read more. Find out more. Get the latest news here before it spreads on social media. Follow and bookmark this link. https://goo.gl/SvY8Kr

“This is part of our continuing capability enhancement program for safekeeping of drug evidence. As the lead agency in the country’s anti-drug campaign, the integrity of PDEA in safekeeping of all pieces of drug evidence is of paramount importance,” Aquino said, adding that air conditioning units, exhaust fans and dehumidifiers were installed for the physical preservation of evidence.

The construction of the new building was made possible through the financial assistance of Senate President Vicente Sotto III and Quezon City 4th District Rep. Feliciano Belmonte Jr. who was the guest of honor and speaker during the inauguration.

Aquino said the PDEA Laboratory Service is the only forensic laboratory in the country that conducts impurity profiling of methamphetamine hydrochloride, popularly known as shabu, which has the capability of determining the linkage that exists between drug samples.

In line with this, a collaborative research with the Advance Device and Materials Testing Laboratory Industrial Technology Development Institute, Department of Science and Technology, entitled “Application of Multivariate Analysis on Methamphetamine Hydrochloride Fingerprints and Kinetic Stability Modelling”, will be conducted to improve its capability in drug profiling.

“As part of its capability enhancement effort, the Laboratory Service has a multi-million analytical equipment of forensic laboratories and additional analytical instruments to be acquired soon,” Aquino said.

Among these is one unit of Liquid Chromatograph with quadruple Time-of Flight- tandem Mass Spectrometry to further enhance its drug impurity profiling of cocaine.

“Necessary training in hands-on operation, proper handling, maintenance, trouble shooting of these pieces of equipment are given priority considering their value and use in laboratory analysis by our chemists,” the PDEA chief added.

The PDEA Laboratory Service began operating in 2006 with only seven organic chemists.

In an effort to cater to the increasing number of seized dangerous drugs and precursors, PDEA said it was able to establish regional laboratories across the country.

“At present, PDEA has a total of 66 chemists deployed to the regional offices nationwide. Chemists both in national and regional laboratories of PDEA underwent the Basic Forensic Training Course prior to their deployment in their areas of assignment. They are sent to various foreign trainings to be updated on drug analysis. Senior chemists from PDEA national and regional offices attended the Advanced Drug Forensic Chemist Training Course to enhance their knowledge on drug analysis,” said Aquino, the current and fifth chief of the country’s lead anti-drug agency.

The PDEA Laboratory Service consistently obtains 100 percent correct identification of illicit drug substances in its participation in the International Collaborative Exercises (ICE) Program conducted by the United Nations Office on Drugs and Crime (UNODC) in Vienna, Austria, making it the only forensic laboratory in the country to attain 100 percent accuracy in international proficiency testing.

PDEA, through the laboratory service, is responsible for the destruction of dangerous drugs, controlled precursors and essential chemicals (CPECs), laboratory equipment seized and those confiscated by other law enforcement agencies upon the order of the court.

Since 2002, PDEA has burned two tons of dangerous drugs, CPECs, and billions worth of laboratory equipment. (PNA)