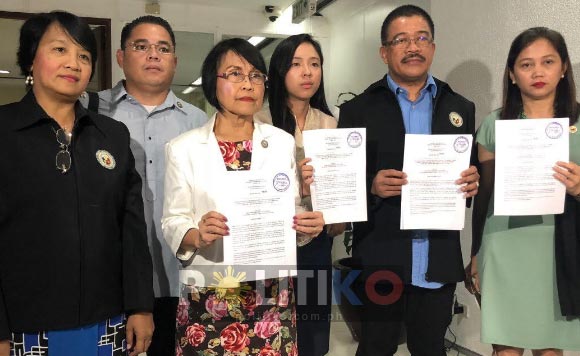 0 1,074
Share
Want more POLITIKO News? Get the latest newsfeed here. We publish dozens and dozens of politics-only news stories every hour. Click here to get to know more about your politiko - from trivial to crucial. it's our commitment to tell their stories. We follow your favorite POLITIKO like they are rockstars. If you are the politiko, always remember, your side is always our story. Read more. Find out more. Get the latest news here before it spreads on social media. Follow and bookmark this link. https://goo.gl/SvY8Kr

Lawmakers from the militant Makabayan bloc are seeking to grant Australian missionary Sister Patricia Fox Filipino citizenship as her deportation from the country looms.

“Granting Filipino citizenship to Sister Patricia Ann Fox would be much more than a fitting recognition for her selfless service to the poor and oppressed Filipinos. It is a response to the call of many farmers, fisherfolks, and indigenous people whose lives were touched and helped by Sister Pat,” said Bayan Muna Rep. Carlos Zarate in a statement.

The bill noted that Fox “lived with and served the Filipino farmers” for 27 years and has “come to understand, experience and embrace the culture and the struggle of the poor Filipino majority.”

“Not only that she speaks their language, Sr. Pat was accepted by the Filipino communities and was treated as one of their own because she lives and struggles with them,” read the bill’s explanatory note.

Fox had been earlier ordered to leave the Philippines by May 25 after her missionary visa was revoked on accusations of involvement in local politics.

The missionary nun filed an appeal with the Department of Justice, with Justice Secretary Menardo Guevarra extending her stay until June 18.

Members of the Makabayan bloc, however, said they are trying to find all possible legal tracks to thwart Fox’s deportation.