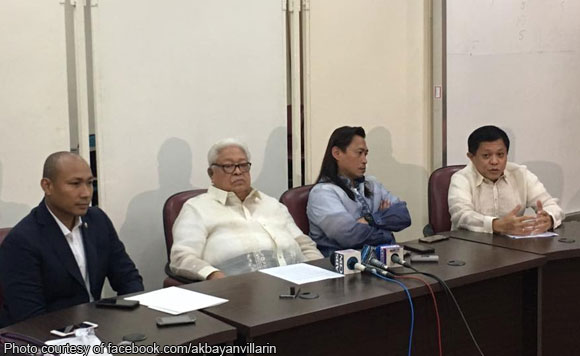 The opposition “Magnificent 7” bloc in the House of Representatives is threatening to file impeachment complaints against eight Supreme Court (SC) justices if they do not reverse their ruling in favor of the quo warranto petition against ousted Chief Justice Maria Lourdes Sereno.

Lagman said they would be filing impeachment complaints individually and as a group within the first two weeks of June — if the SC still has not turned its back on its controversial decision.

“We are just saying that if there is insistence and persistence on the part of the eight justices not to reconsider their decision, then there is an option for the people which is the impeachment of the justices based on culpable violation of the Constitution,” Lagman said.

“We rejected the decision of the [SC] when they allowed the burial of [former President Ferdinand] in the Libingan ng mga Bayani. We also rejected the [SC] decisions when they sustained the declaration of martial law and its extension, but we never said we will file an impeachment case against those whose decision we did not favor,” Lagman said.

“It is not true that just because we don’t favor the decision we would call for impeachment,” he said.

The group of opposition solons alleges that De Castro, Peralta, Bersamin, Jardeleza, Martires, Tijam, Reyes and Gesmundo culpably violated the Constitution for arrogating the power of Congress to impeach the Chief Justice, in violation of Article XI, Sections 2, 3(1) and 3(6) of the Constitution.

They also claimed that the eight justices violated Article VIII, Section 8(5) of the Constitution, which provides that the Judicial and Bar Council “shall have the principal function of recommending appointees to the Judiciary,” after they “repudiated” its and former President Noynoy Aquino’s recommendations to appoint Sereno to the top post in the judiciary.

The bloc also said De Castro, Peralta, Bersamin, Jardeleza and Tijam betrayed public trust when they refused to inhibit from hearing the quo warranto petition, despite their “publicly [expression of] their bias against her (Sereno) when they testified for her impeachment before the House Committee on Justice.”

They also said all eight justices betrayed public trust for “[subverting] the fundamental law by utterly disregarding the clear provisions of the Constitution, thus abandoning the public trust reposed on them.”

In a special session four days before Congress returned from their eight-week Lenten break, the SC, in an 8-6 vote, granted Solicitor General Jose Calida’s quo warranto petition against Sereno, resulting in her disqualification and ouster from office.

This, House leaders say, rendered the impeachment complaint filed against Sereno in the lower chamber moot as there was no longer any chief justice to impeach and remove from office.

But the Magnificent 7 said the quo warranto petition is a “legal anomaly” which the SC “should [have] dismissed outright.”

“Never in the 117-year history of the Supreme Court has any of its decisions ignited such a widespread and collective condemnation from an aggrieved nation than the 8-6 decision ousting [Sereno] in an improvident and unwarranted quo warranto petition,” they said.