Gabriela: Why is Duterte so afraid of women? 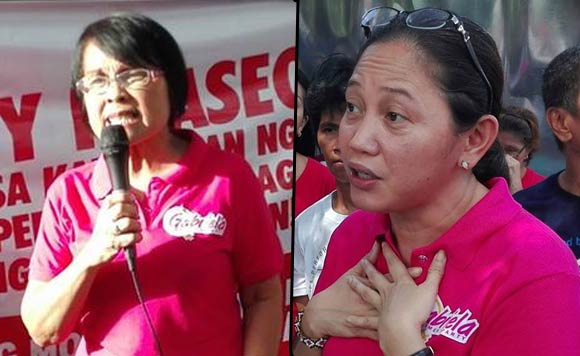 0 1,403
Share
Want more POLITIKO News? Get the latest newsfeed here. We publish dozens and dozens of politics-only news stories every hour. Click here to get to know more about your politiko - from trivial to crucial. it's our commitment to tell their stories. We follow your favorite POLITIKO like they are rockstars. If you are the politiko, always remember, your side is always our story. Read more. Find out more. Get the latest news here before it spreads on social media. Follow and bookmark this link. https://goo.gl/SvY8Kr

Gabriela partylist Representatives Emmi de Jesus and Arlene Brosas on Thursday expressed outrage over President Rodrigo Duterte’s remark that the next Chief Justice or Ombudsman should not be a woman.

“President Duterte’s statement that the next Chief Justice [or Ombudsman] is not a woman speaks boldly of his sick, macabre misogyny,” the women lawmakers said.

Duterte was asked on Wednesday who was his choice to replace Ombudsman Conchita Carpio Morales. He replied that he would consult staff of the Office of the Ombudsman before making a choice.

He was also asked by reporters about the next “CJ” or Chief Justice.

But it was not very clear from footage of the chance interview whether Duterte was referring to the next Ombudsman or the next Chief Justice.

Morales is retiring in July, while Chief Justice Maria Lourdes Sereno was ousted by her peers in the Supreme Court.

“It seems the quo warranto coup against former CJ Sereno is not enough: he is yet again rewriting the laws and the Constitution to effectively bar a woman from the Chief Magistrate post. This runs counter to the constitutional mandate of the State to enable women to realize their full potential in the service of the nation,” the Gabriela representatives said.

“What does President Duterte fear of women? Why is he so threatened by women? He pushed the ouster of a female Chief Justice, ordered troops to shoot female rebels in the vagina, tells soldiers to rape women in Marawi, and even allowed the removal of a comfort woman statue from public’s sight,” the Makabayan congresswomen said.

“We are perturbed and extremely enraged that the sickest form of misogyny sits at the presidential seat in Malacañang,” they added.