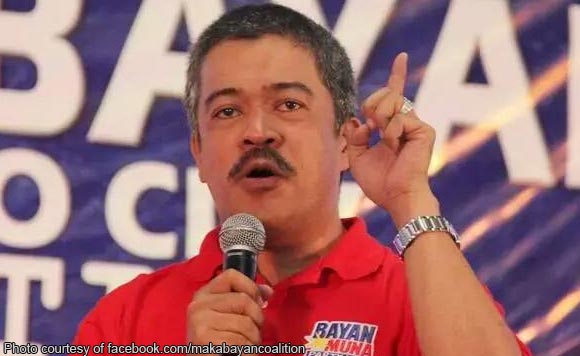 0 815
Share
Want more POLITIKO News? Get the latest newsfeed here. We publish dozens and dozens of politics-only news stories every hour. Click here to get to know more about your politiko - from trivial to crucial. it's our commitment to tell their stories. We follow your favorite POLITIKO like they are rockstars. If you are the politiko, always remember, your side is always our story. Read more. Find out more. Get the latest news here before it spreads on social media. Follow and bookmark this link. https://goo.gl/SvY8Kr

Bayan Muna partylist Rep. Carlos Isagani Zarate led on Thursday the filing of a bill to repeal what he described as “anti-poor and anti-people” Tax Reform for Acceleration and Inclusion (TRAIN) Law, citing detrimental effects on majority of the Filipino people.

“What is needed now is not just a mere review or suspension of the TRAIN law. The TRAIN law needs to be repealed,” said Zarate.

Under House Bill 7653, the Makabayan bloc seeks the repeal of certain provisions of the TRAIN law “so as to lessen the burden of consumers,” according to Zarate.

He said the poor were the ones bearing the brunt of the TRAIN law. “They don’t even feel the supposed 6.8% growth of the Philippine economy,” he added.

The Makabayan bloc is composed of Zarate, Emmi de Jesus and Arlene Brosas of Gabriela, Antonio Tinio and France Castro of ACT-TEACHERS, Ariel Casilao of Anakpawis and Sarah Elago of Kabataan.

Some of the provisions in the Makabayan bill are as follow:

Repeals the whole section on distribution of incremental income from TRAIN (70% build, build, build and 30% on social measures) (Section 7);
Restores the personal exemption worth P50K and P25K/dependent (Section 2);

Restores the Value Added Tax (VAT) exemption of sales of electricity by generation companies, transmission by any entity, and distribution companies including electric cooperatives (Section 2);

Restores the 3% tax exemption of cooperatives, self-employed and professionals with gross receipts of P2,000,000 and below (Section 4).

“This bill should not be seen as a hindrance by the administration and taken as a means to assuage the suffering of our poor countrymen,” Zarate said.

“We hope that this bill will be fast tracked by Congress because the economic suffering being endured by our countrymen because of the TRAIN law is very real and should be addressed the soonest time possible,” he said.