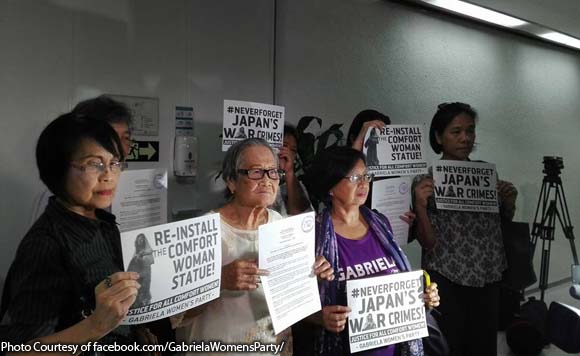 0 1,667
Share
Want more POLITIKO News? Get the latest newsfeed here. We publish dozens and dozens of politics-only news stories every hour. Click here to get to know more about your politiko - from trivial to crucial. it's our commitment to tell their stories. We follow your favorite POLITIKO like they are rockstars. If you are the politiko, always remember, your side is always our story. Read more. Find out more. Get the latest news here before it spreads on social media. Follow and bookmark this link. https://goo.gl/SvY8Kr

Gabriela partylist lawmakers on Thursday filed a House resolution seeking to investigate the removal of a comfort woman statue along Roxas Boulevard in Manila.

In filing House Resolution 1859, Gabriela Representatives Emmi de Jesus and Arlene Brosas said the removal of the statue “violates existing laws and blackens the memory of abused comfort women who died without even getting a formal apology from the Japanese government for the historical injustice which they suffered.”

“We will never allow our dignity and our collective quest for justice to be traded merely for Japanese loans and investments. We will never let this incident be swept under the rug,” De Jesus said.

The Gabriela lawmaker noted that the comfort woman statue bears the official marker, indicating that any modification or destruction of it shall be illegal under Presidential Decree 1505.

For her part, Brosas said the House panel on foreign affairs should summon Foreign Secretary Alan Peter Cayetano and other DFA officials to explain the “extremely urgent” letter which it sent to the Manila City government and National Historical Commission of the Philippines (NHCP) regarding the statue.

“Why should the local government and the NHCP explain to the DFA the unveiling of a comfort woman statue in Manila? What is the role of DFA in the removal of the statue? Secretary Cayetano should answer this in a congressional inquiry,” Brosas said.

“Past presidents have neglected the demands and plight of Filipino comfort women and have instead kowtowed to the wishes and orders of the Japanese government in revising history. Now, the Duterte regime is doing the same so as not to discourage Japanese investments to its mega-infrastructure projects,” she added.

Gabriela said they will also convince allies in the Senate to sponsor a counterpart resolution seeking an investigation on the comfort woman statue’s removal.

In 2016, the women’s party-list filed House Resolution 213 urging the Philippine government to demand a formal apology from Japan for the sexual slavery of thousands of Filipino women by the Japanese Imperial Army during WW II.