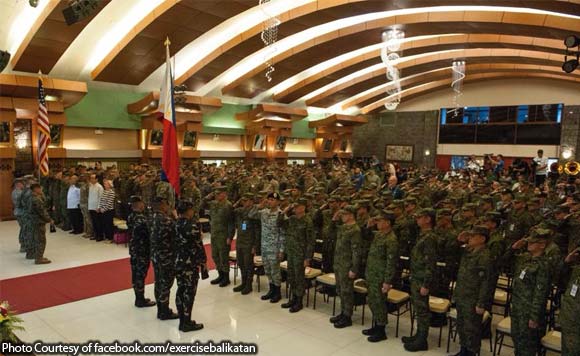 Gabriela partylist Rep. Arlene Brosas on Wednesday demanded the Armed Forces of the Philippines to disclose details of its ongoing joint military exercises with the US military under Balikatan 2018.

The Makabayan lawmaker said she found suspicious the lack of publicly available information about the military exercises.

“The dearth of details on the ongoing Balikatan exercises fuels grave concerns on how these military exercises are transforming communities into actual battlefields under the banner of counter-terrorism,” Brosas said.

“To what extent shall existing PH military bases and territories be utilized? How will these affect women and their communities?” she added.

Brosas said Filipinos “have every right to know what is going on as the US-PH military forces hold war drills with Japan and Australia amid China’s aggressive military construction and occupation of contested territories.”

“President Duterte, in his cowardly subservience to both China and the US, may very well be setting up our country as the venue of the next big war theater in Southeast Asia while we scramble in darkness,” she said.

Brosas, who joined various groups yesterday in the protest caravan to Pampanga, said the Duterte regime should also disclose how the P128 million EDCA (Enhanced Defense Cooperation Agreement) counterpart fund is being spent amid the ongoing exercises.

“We may be footing the bill for the war exercises that will disrupt the livelihood of Filipinos and lead to more abuses against women and rights violations of the people as the AFP continues to wage a counter-terrorism drive against legal activists,” she said.