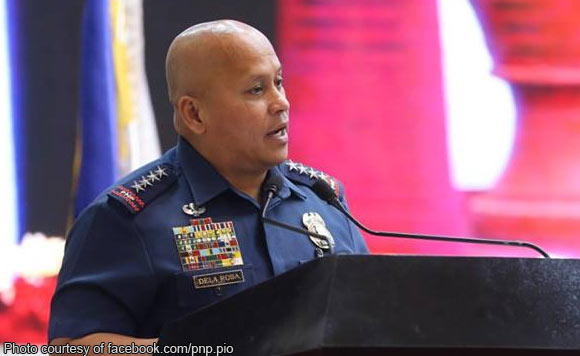 0 807
Share
Want more POLITIKO News? Get the latest newsfeed here. We publish dozens and dozens of politics-only news stories every hour. Click here to get to know more about your politiko - from trivial to crucial. it's our commitment to tell their stories. We follow your favorite POLITIKO like they are rockstars. If you are the politiko, always remember, your side is always our story. Read more. Find out more. Get the latest news here before it spreads on social media. Follow and bookmark this link. https://goo.gl/SvY8Kr

“There will be only one marching order for Chief dela Rosa: Destroy the drug machinery inside the penitentiary,” Guevara said in a text message sent to Philippine News Agency.

Guevarra made the remarks following reports that illegal drugs continued to proliferate inside the country’s national top penitentiary.

Guevara will meet dela Rosa on Friday to discuss plans at the BuCor.

BuCor is one of the agencies under DOJ, which also include the National Bureau of Investigation (NBI), Bureau of Immigration (BI), and the Land Registration Authority (LRA).

On Monday, dela Rosa, former Philippine National Police chief, asked for the cooperation of BuCor officials and employees to accomplish this task.

Dela Rosa warned high-profile inmates in the NBP, that he would be relentless in going after those who continue their illegal activities inside the national penitentiary.

He made the remarks during his visit to the high-profile inmates in Building 14 of the NBP’s maximum security compound.