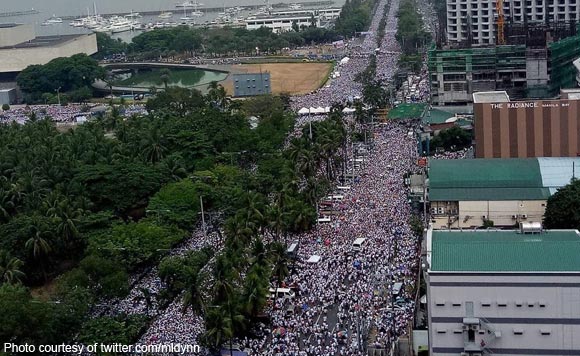 The Iglesia ni Cristo (INC or Church of Christ) claimed it has broken the record for the largest human sentence with 23,235 participants forming the sentence “Proud to be a member of Iglesia Ni Cristo” held at the Quirino Grandstand in Manila Sunday morning.

“We broke the record for the largest human sentence with 23,235 participants,” said Bro. Erwin Briones, of the INC-Public Information Office (PIO).

The event shattered the record set by India in 2016 with 16,550 people forming the sentence, “You Can You Will.”

He added that they were also attempting to break four more Guinness World Records namely: the largest photo mosaic; the largest charity walk, single venue, multiple venues and most number of nationalities.

The human sentence formation was conducted in line with the INC’s “Worldwide Walk to Fight Poverty”, which was held at the iconic Roxas Boulevard in Manila.

Participants, upon finishing the event, were directed to drop their wrist bands located at the end of the finish line.

The number of wrist bands would indicate the total number of people who participated in the event.

The event aims to beat its 2014 record of more than 500,000 participants from 129 sites across the world, situated in 16 countries. It was recognized as the largest charity walk across multiple venues held in 24 hours.

The proceeds of the Second Worldwide Walk will be used to continue providing food and medical assistance for those in immediate need in impoverished communities.

The 2014 charity walk benefited victims of typhoon Yolanda, also known as Haiyan, which devastated the country in November 2013 particularly the Visayas region. It was the strongest tropical storm recorded in history.(PNA)