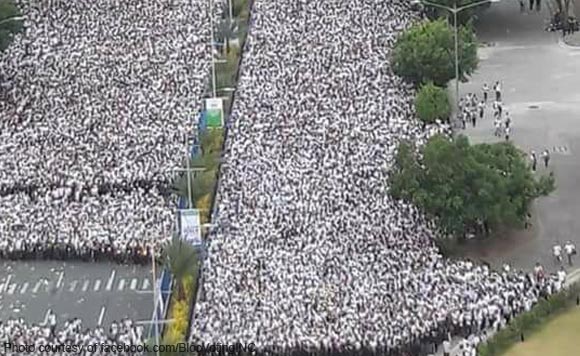 The Iglesia ni Cristo (INC) just showed to the world how solid they are as a religious group.

More than a million people showed up during the Worldwide Walk to Fight Poverty event of the INC at Quirino Granstand in Manila on Sunday, May 6.

Given this massive turnout, INC bagged a new Guinness record for the largest human sentence, according to church-run Eagle News in a tweet at 10:20 am on Sunday.

Eagle News said the INC gathered 23,235 participants who formed the sentence “Proud to be a member of Iglesia ni Cristo” toppling the 16,550 participants of previous record-holder, the Rotary International District 3000, Rotary Club of Perambalur New Gen, and Roever Group of Educational Institutions, who formed the sentence “You can you will” in Perambalur, India in 2016.

The Philippine National Police, meanwhile, pegged the total number of participants at 1.2 million as of 9 a.m.

The event which started at 6 a.m. is set to happen simultaneously “in more than 300 sites across 18 time zones around the world.”

The INC has at least 2.25 million followers since its inception in the Philippines in 1914.