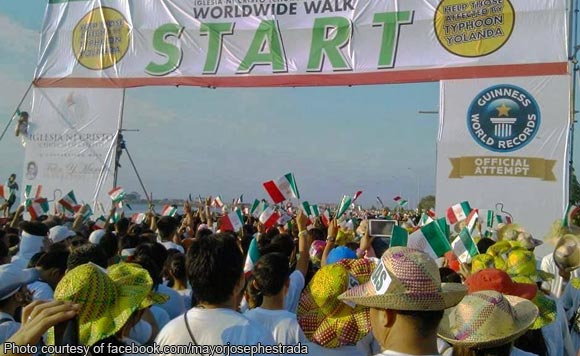 Ain’t no road too long for this politiko when it comes to helping the needy.

Manila Mayor Joseph “Erap” Estrada is set to lead thousands of people who will participate in Iglesia Ni Cristo’s “Worldwide Walk vs Poverty” on May 6.

The event is part of the religious group’s fund-raising program to support its various feeding and medical mission programs in the country.

The 81-year-old politiko said Manila’s poor communities will be among the beneficiaries of the event to be held in various countries worldwide.

“The INC and the Manila city government are always cooperating with the aspirations of providing aid to the most Filipinos in the country,” Estrada said.

He said the event is expected to replicate the INCs’ charity walk in 2014 where at least half a million people joined placing the event in the Guinness Book of Records as the largest group of marchers in a single day. Proceeds of the 2014 walk went to victims of super typhoon Yolanda.

The event will start from 6 a.m. onwards on May 6 along Roxas Boulevard in Manila.

Estrada said road closures in Manila will start midnight of May 5 until 10 p.m. of May 6 urging motorists to take alternative routes to minimize traffic congestion.