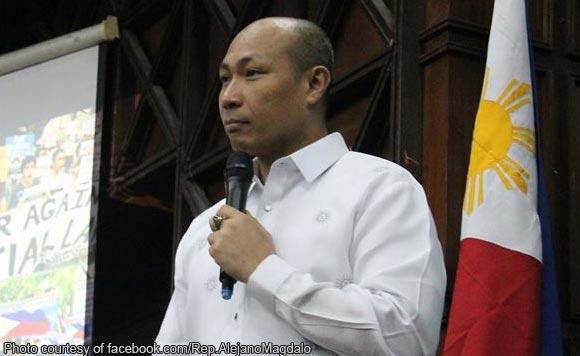 Proponents of Charter change should “consider and reflect” on the results of the recent Pulse Asia Survey showing growing opposition of the public to the attempts to revise the 1987 Constitution to federalize the republic, according to Magdalo partylist Rep. Gary Alejano.

The Magnificent 7 lawmaker said it appeared that the people’s answer was a resounding “NO” to changing our Constitution.

The survey showed that only 23 percent of respondents are open to amending the 1987 Constitution, while 64 percent of the respondents say otherwise. Additionally, results indicate that 66 percent of Filipinos do not favor the shift to a federal system of government.

“These numbers reveal the doubts of the people on the real intentions of the proponents in amending the Constitution. Among which is the opening up of our natural resources and economy to foreigners. China is just waiting for this opportunity,” Alejano said.

“With this negative public perception, it is baffling that supporters of federalism even want to force, and fast-track the process, going as far as aiming for a 2018 plebiscite,” he said.

“It is not a huge secret, however, how these numbers came to be. There is clear lack of education on the contents of the proposed federal constitution. The proponents do not even have a common draft to begin with. Dinadaan na lang sa pananakot at pambabraso para suportahan ang pagpalit ng Konstitusyon,” he added.

“Before imposing rash changes of the country’s fundamental law, I believe that a thorough review of our existing laws, especially the Local Government Code of 1991 (RA 7160), must be undertaken first,” Alejano said.

“RA 7160, which provides the stage before any shift to federalism, should first serve its objective of providing more local autonomy to local government units. The law has not been reviewed for the last 27 years,” he said.