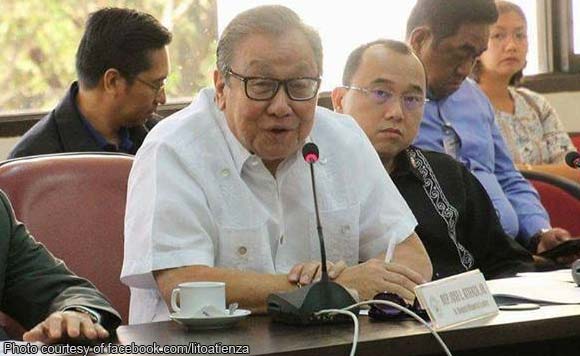 Buhay partylist Rep. Lito Atienza on Tuesday expressed his full support for President Rodrigo Duterte’s offer to China of a 60-40 split in the planned joint exploration agreement in the South China Sea.

“We fully support and appreciate President Duterte’s plan to forge a 60-40 sharing agreement with China for the joint exploration of the South China Sea, rather than risk going to war with our superpower neighbor,” the senior deputy minority leader said.

“Unlike the Benham Rise — which was undisputed and duly declared by the United Nations Convention on the Law of the Sea (UNCLOS) as part of Philippine territory — the islands in the South China Sea are still being contested with long-standing claims not just by the Philippines and China, but by a host of other countries as well, among them Taiwan, Brunei, Malaysia, Indonesia and Vietnam,” Atienza said.

“President Duterte’s position for the joint exploration is a win-win situation and will definitely benefit both countries economically from whatever is discovered and developed in the area,” he said.

“If we listen to hotheaded politicians and naysayers, then we would all end up with nothing. Sometimes emotionalism is not the best and cannot provide any real and tangible benefits for our country,” Atienza said.

“Can they guarantee any beneficial effects if we go up against our superpower neighbor? Sayang lang if we don’t push through with this. Wala naman tayong pera pang-explore on our own. E wala nga tayo ni perang panglinis ng Pasig River. We fully support the President on this and we believe this is the best solution for everyone,” he added.