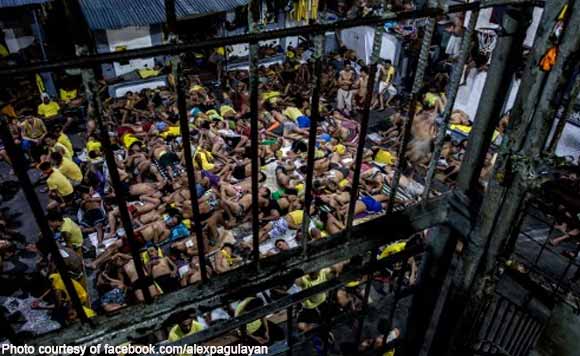 0 3,364
Share
Want more POLITIKO News? Get the latest newsfeed here. We publish dozens and dozens of politics-only news stories every hour. Click here to get to know more about your politiko - from trivial to crucial. it's our commitment to tell their stories. We follow your favorite POLITIKO like they are rockstars. If you are the politiko, always remember, your side is always our story. Read more. Find out more. Get the latest news here before it spreads on social media. Follow and bookmark this link. https://goo.gl/SvY8Kr

Saying prison congestion is a form of human rights violation, the Catholic Bishops’ Conference of the Philippines urged the government to take a closer look at the issue.

The CBCP Episcopal Commission on Prison Pastoral Care said the “unfortunate situation” sees inmates being deprived of their rights.

“Prisoners too deserve to be treated humanely. They may be deprived of freedom, but the jails should not deprive them of their basic rights, among which is better living condition in their cells,” Commission chairman Bishop Joel Baylon said (http://cbcpnews.net/cbcpnews/cbcp-agency-urge-govt-to-tackle-prison-congestion/).

Last April 11, an inmate in the overcrowded Pasay City jail died, while six others were rushed to the hospital after fainting due to the heat.

It said the Calabarzon Police Regional Office has the highest congestion rate, with 78 of its 172 custodial centers being overcrowded.

For his part, ECPPC executive secretary Rodolfo Diamante noted there were already laws to address the problem.

“What is needed is for the administration to make it a priority,” he said.

“It is just unfortunate that our policy makers and implementors are too preoccupied in attending to their concerns,” he added.