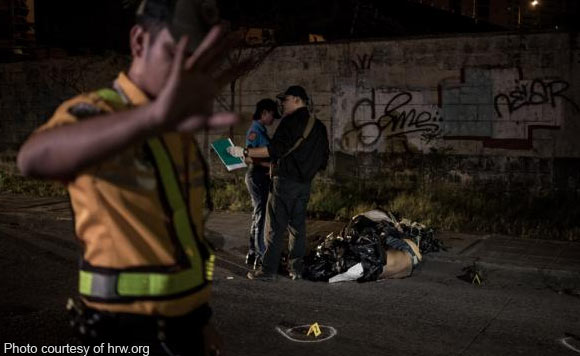 0 743
Share
Want more POLITIKO News? Get the latest newsfeed here. We publish dozens and dozens of politics-only news stories every hour. Click here to get to know more about your politiko - from trivial to crucial. it's our commitment to tell their stories. We follow your favorite POLITIKO like they are rockstars. If you are the politiko, always remember, your side is always our story. Read more. Find out more. Get the latest news here before it spreads on social media. Follow and bookmark this link. https://goo.gl/SvY8Kr

Akbayan party-list warned that the Philippines risks losing $9.5 billion in exports to the EU and around 200,000 domestic jobs if it does not heed the European Parliament’s call to end the drug war.

“If substantively, the conditions are not met, meaning judicial killings would not stop, death penalty would be pushed through in Congress and the lowering of the age of discernment, or criminality will be pushed through, if that should happen, they are going to withdraw the GSP+,” said former Commission on Human Rights chair and Akbayan chair emeritus Etta Rosales in a media briefing Tuesday (April 24).

Rosales was referring to the Special Incentive Arrangement for Sustainable Development and Good Governance (GSP+) which grants tariff-free trade to around 6,200 Philippine products to the EU in exchange for the effective implementation of international conventions on human rights, labor, environmental protection and good governance.

The European Parliament, in a resolution adopted last week, called on the Philippines to put an end to the bloody drug war, or else it will temporarily remove the country from the GSP+.

Villarin initially said the stripping of tariff benefits from the Philippines would happen “immediately” but later clarified that the EU would summon Philippine Ambassador Franz Jessen to explain the country’s position.

“It has to come forward to the international community and acknowledge all these killings and to reverse all these policies and say that the Philippines is now again the forefront of really recognizing human rights,” Villarin said.

“But if the President continues to insist on extrajudicial killings and the failed drug war, I think the blame would be entirely on the Duterte administration,” he continued.

The opposition lawmaker claimed the bulk of products which would be affected by the trade sanction would be from Duterte’s home region of Mindanao and would include oil, textiles, garments and tuna.

“This would be a slap on the face of the Philippines in the international community, considering that the European Union is a strong voice in the global community when it comes to human rights and international relations,” Villarin said.

But the Duterte administration remains adamant in its drug war, with the Palace decrying the European Parliament’s resolution as “interference” and Foreign Affairs Secretary Alan Peter Cayetano dubbing it “unwarranted and uncalled for.”

Senate President Koko Pimentel, a close ally of Duterte, has also slammed the EU anew for “micromanaging” the Philippines.