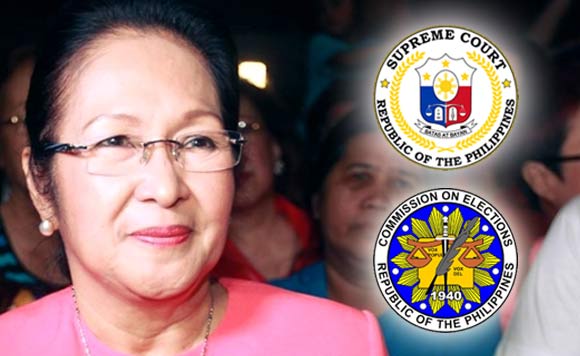 San Juan City Mayor Guia Gomez has filed a petition before the Supreme Court (SC) in a bid to halt the resolution made by the Commission on Elections (Comelec), which approved the recall petition filed by losing mayoralty candidate and former San Juan Vice Mayor Francis Zamora against her.

“Upon the filing of this Petition and finding that the same is sufficient in form and substance that a temporary restraining order (TRO) and/or status quo ante order and/or writ of preliminary injuction be issued forthwith, commanding and directing Public Respondent Comelec en banc to cease and desist from implementing the challenged Resolution dated April 17, 2018 and Resolution No. 17-0671 dated November 16, 2017,” read the petition filed last April 20.

Gomez also argued that the Comelec has committed several violations, particularly in ruling that the recall polls must push through despite the fact that there was no quorum.

The Comelec admitted that the voting is 2-1-1. Hence, there was no clear majority as required by the law, she said.

The two Commissioners who granted the recall polls against Gomez are Commissioners Al Parreño and Louie Guia, while Commissioner Rowena Guanzon is the lone dissenter and Shariff Abbas took no part.

“Since only three commissioners of public respondent Comelec en banc took part in the deliberation, it cannot be denied that there was no quorum for the purpose of transacting business during the said undertaking. That said, the Notice dated March 27, 2018 is null and void ab initio,” it stated.

“(T)here being seven members of public respondent Comelec en banc, it is likewise required that there should at least be four votes from the incumbent Members of the public respondent in order to obtain the required concurrence of the majority for the pronouncement of a decision, resolution, order or ruling in this case,” Gomez said in her petition, who was a long-time partner of former President and now Manila Mayor Joseph Estrada and mother of Senator JV Ejercito.

It pointed out that “public respondent Comelec en banc, had no authority to issue the aforesaid notice sans the required quorum mandated by Section 5, Rule 3 of the Comelec Rules of Procedure.”

Gomez also said that Comelec abused its authority by entertaining a list of signatories, who are pushing the recall elections, which are defective since it relied only on xeroxed documents.

“Based therefrom, it is evident that public respondent Comelec en banc committed grave abuse of discretion amounting to lack or excess of jurisdiction when it approved the recommendation of Deputy Executive Director for Operations Bartolome J. Sinocruz, Jr. to certify the sufficiency of the Petition for Recall of Mayor Guia G. Gomez (“Gomez”) of San Juan City even though the private respondents failed to attach the original copies of the required supporting documents, including the list and signatures of the supporting petitioners for the petition for recall.”

The private respondents to the case are Sophia Patricia Gil, Raymond Alzona and Jun Paul Aquino, who are San Juan residents and allegedly supporters of Zamora.

Gomez also said that the private respondents, who are pushing for the recall, can even be charged with perjury for making untruthful statement as to the actual physical count of signatures.

Comelec spokesperson James Jimenez said he could not confirm the reason of the Commission en banc in approving the recall petition.

“To be clear, a finding on the sufficiency has been made; I cannot confirm or deny what the finding was, so as not to preempt the parties filing their respective motions for reconsideration if they so wish,” the poll body official said.

Last May 17, Zamora’s supporters filed a petition calling for a recall election in the city after submitting some 30,000 signatures of San Juan residents.

The petition stemmed from Gomez’s alleged involvement in graft and corruption, incompetence, abuse of power and dereliction of duty. (PNA)