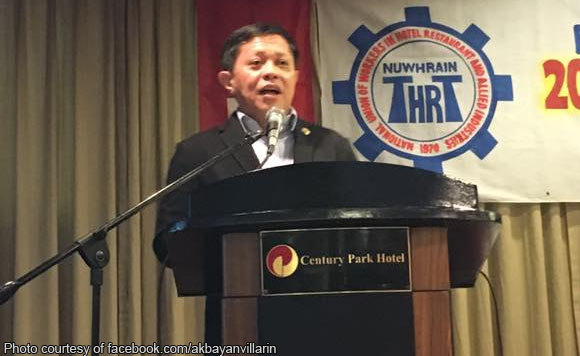 Akbayan party-list Rep. Tom Villarin slammed Foreign Affairs Secretary Alan Peter Cayetano for describing the resolution adopted by the European Parliament asking to end the drug war as an “interference,” but not budging when it comes to China’s presence in the West Philippine Sea.

“Secretary Alan Peter Cayetano maintains a double standard in foreign policy when he describes the action of the European parliament as constituting interference when right in our own backyard China is aggressively taking our islands with only a muted response from the Department of Foreign Affairs,” Villarin said Saturday (April 21) in a statement.

“Cayetano warns the EU of having crossed the red line when written on his face is the nine-dash line of China. Talk about foreign interference,” he continued.

It also urged EU-member states to call for the Philippines’ removal from the UN Human Rights Council and for its temporary removal from the EU’s Special Incentive Arrangement for Sustainable Development and Good Governance, a program that grants tariff-free trade on select goods, provided that participating countries effectively implement international conventions on human rights, labor, environmental protection and good governance.

In a statement, Cayetano called the resolution “unwarranted and uncalled for” and reminded the European Parliament to respect the Philippines’ right to determine national policies.

But Villarin said the Foreign Affairs secretary should not have issued the statement and instead “reasoned with understanding where the parliament is coming from.”

“It only shows his lack of diplomatic tack to address the growing global concern on the government’s failed war on drugs that killed at least 12,000 Filipinos. Rather than acknowledging the issue of accountability, he questions their motivation,” Villarin said.

This week, photos published by the Philippine Daily Inquirer showed two Chinese planes on Panganiban Reef, which is within the Philippines’ 370-kilometer exclusive economic zone.

In response, Cayetano said the Philippines is eyeing taking diplomatic action against China, which may include a diplomatic protest.

This is a turnaround from his previous statement that it is no longer the Philippines’ policy to file diplomatic protests against China, as the country continues to cozy up to Beijing.