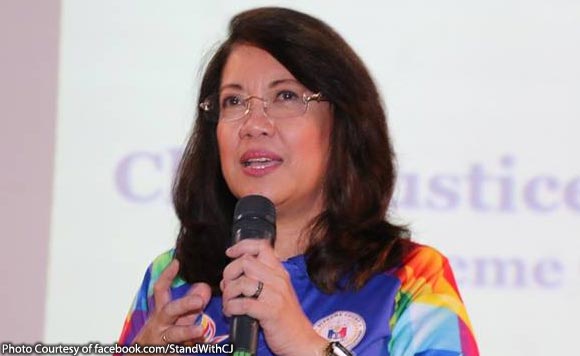 A group supporting Chief Justice Maria Lourdes Sereno insisted that her five colleagues in the Supreme Court should inhibit themselves from the quo warranto case filed against her.

“This is an outright violation of her constitutional right to due process, as well as a brazen and disdainful rejection of jurisprudence and the Code of Judicial Conduct which state that justices and judges must inhibit if they cannot be impartial,” the group said in a statement.

The group reminded that Section 7(3), Article III of the Constitution requires the members of the judiciary to be persons of “proven competence, integrity, probity and independence.”

“Laymen understand the fundamental tenets of fair play that support these principles. We expect the learned Justices of the Supreme Court to surpass our meager appreciation and apply them,” it said.

“Yet, the Biased 5 refuse. We cannot impute this to ignorance of the law—which in any case, is no excuse—but to their cavalier attitude of being above the law. This is a position we cannot tolerate,” it added.

They likewise pointed out that the Code of Judicial independence mandates that judges to “perform their judicial duties without favor, bias or prejudice.”

They said this stance has been affirmed by the SC in its past ruling where it declared that “due process of law requires a hearing before an impartial and disinterested tribunal, and that every litigant is entitled to nothing less than a cold neutrality of an impartial judge.”

Sereno earlier sought the inhibition of five SC justices for having testified against her during the impeachment proceedings at the House of Representatives.

Solicitor General Jose Calida filed the quo warranto petition against Sereno seeking to nullify her appointment in 2012 due to alleged failure to file her Statements of Assets, Liabilities and Net Worth (SALN).

Sereno, however, insisted that impeachable officers like herself can only be removed from office through impeachment.