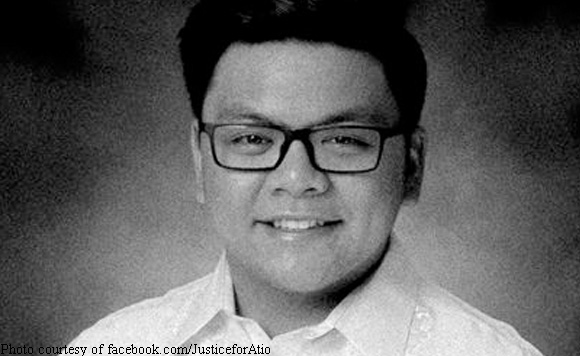 0 1,207
Share
Want more POLITIKO News? Get the latest newsfeed here. We publish dozens and dozens of politics-only news stories every hour. Click here to get to know more about your politiko - from trivial to crucial. it's our commitment to tell their stories. We follow your favorite POLITIKO like they are rockstars. If you are the politiko, always remember, your side is always our story. Read more. Find out more. Get the latest news here before it spreads on social media. Follow and bookmark this link. https://goo.gl/SvY8Kr

A Manila court judge has inhibited himself from hearing the case against 10 Aegis Juris fraternity members over the death of law student Horacio “Atio” Castillo III.

In a resolution dated March 23, Manila Regional Trial Court Branch 40 Presiding Judge Alfredo Ampuan recused himself from the case despite citing not enough grounds to do so.

“The Presiding Judge indeed sees no reason for him to inhibit from the case,” Ampuan said in his resolution.

“Nevertheless, notwithstanding the foregoing, this Court finds it appropriate to grant motion for inhibition considering that all the above-mentioned accused and/or respective counsel already nurtured at the back of their minds the thought that the Presiding Judge of this Court has now titled the scales of justice against them,” he added.

Three of the accused — Jose Miguel Salamat, John Robin Ramos, and Danielle Hans Matthew Rodrigo — wanted Ampuan to inhibit himself from the case citing ties with Volunteers Against Crime and Corruption head Dante Jimenez, who offered legal assistance to Castillo’s family. Jimenez is the brother-in-law of Ampuan.

“After due consideration, the Court finds none of the foregoing to be a sufficient ground for him to inhibit from hearing the case,” the resolution said, adding that the allegations of the accused were “without bases.”

Ampuan likewise insisted that his relation with Jimenez would not affect his judgment on the case.

“More often that not Judges have no more time with the immediate members of their respective families, how much more for the advocacy and concern of other people like the brother-in-law of the Presiding Judge,” the resolution said.

“It bears stressing that the Presiding Judge cannot be influenced by anybody in rendering fair and impartial judgment without fear or favor not even by his brother-in-law, relatives, friends, and associates,” it added.

Ampuan said the “mere imputation of bias” is insufficient ground for inhibition.

“Extrinsic evidence must be presented to establish bias, bad faith, malice or corrupt purpose, in addition to palpable order which may be inferred from the decision or order,” the resolution stated.