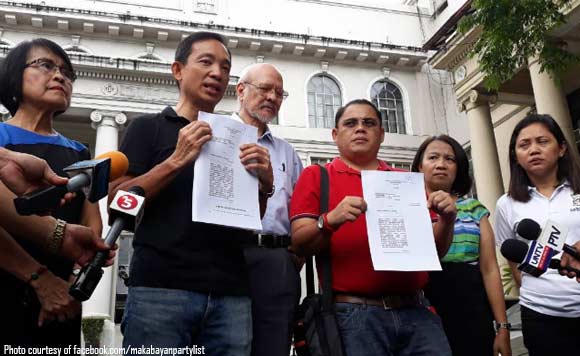 0 1,105
Share
Want more POLITIKO News? Get the latest newsfeed here. We publish dozens and dozens of politics-only news stories every hour. Click here to get to know more about your politiko - from trivial to crucial. it's our commitment to tell their stories. We follow your favorite POLITIKO like they are rockstars. If you are the politiko, always remember, your side is always our story. Read more. Find out more. Get the latest news here before it spreads on social media. Follow and bookmark this link. https://goo.gl/SvY8Kr

Left-leaning lawmakers trooped to the Supreme Court to file a motion for intervention and an opposition-in-intervention that sought the dismissal of Solicitor General Jose Calida’s quo warranto plea.

According to Bayan Muna Rep. Carlos Zarate, the filing of the quo warranto case sets a “very dangerous and ruinous precedent that can even be used against any impeachable officer, including other justices of the Supreme Court who go against the wishes of and in the crosshairs of the administration or interest groups.”

The group’s intervention was the second filed during the day seeking to junk Sereno’s removal bid.

The first group was led by activist priest Robert Reyes.

Makabayan bloc insisted that impeachment is the only allowable way to remove an impeachable official including the top magistrate.

They added the issue of Sereno’s statements of assets and liabilities “does not affect her qualifications” as chief justice.

“The quo warranto petition intentionally derails the ongoing impeachment process in Congress, and it attempts to wrest the constitutional power away from Congress and the Filipino people,” the group said.