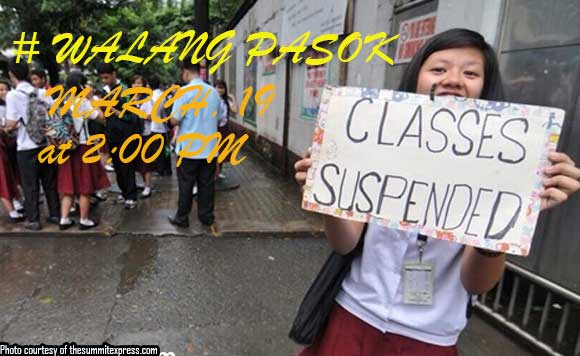 This after Malacañang suspended classes in all levels in the metro due to the nationwide transport strike.

“This is to announce that classes at all levels in Metro Manila have been suspended today, March 19, at 2:00PM,” a statement from the Office of the Executive Secretary read.

Universities and colleges earlier suspended classes due to the transport strike in protest of the government’s transport modernization program.

In a separate statement, Presidential Spokesperson Harry Roque said the Palace is considering a weeklong suspension of classes if the transport strike will continue in the coming days.

“If and when Piston pushes through with its threat to continue its nationwide strike, despite its unsuccessful staging today, we will call for a class suspension in Metro Manila starting tomorrow, March 20 until Friday, March 23,” he said.