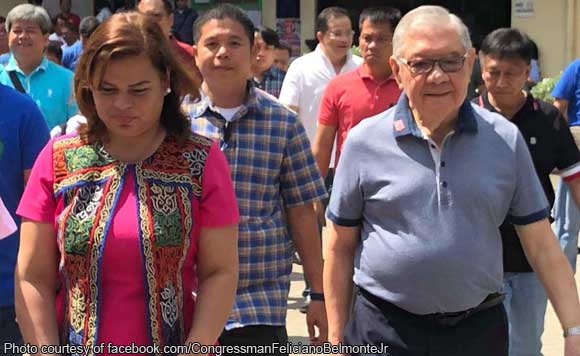 0 2,287
Share
Want more POLITIKO News? Get the latest newsfeed here. We publish dozens and dozens of politics-only news stories every hour. Click here to get to know more about your politiko - from trivial to crucial. it's our commitment to tell their stories. We follow your favorite POLITIKO like they are rockstars. If you are the politiko, always remember, your side is always our story. Read more. Find out more. Get the latest news here before it spreads on social media. Follow and bookmark this link. https://goo.gl/SvY8Kr

The father-daughter tandem of Quezon City Rep. Feliciano “Sonny” Belmonte Jr. and Vice Mayor Joy Belmonte are making sure they have their bases covered ahead of a possible showdown in the 2019 polls.

Aside from staying close to President Rodrigo Duterte by tagging along on his foreign trips, Sonny is making himself familiar to Davao City Mayor Sara Duterte, who created her own political party, Hugpong ng Pagbabago.

Sonny accompanied Sara when she visited Quezon City on March 14 for the celebration of Women’s Month.

Two days later, it was Joy’s turn to see Sara when she flew to Davao City to join in the celebration of Araw ng Davao.

Despite being a member of PDP-Laban, there are rumors that Joy hasn’t gotten the party’s endorsement yet for her mayoralty bid.

Another local politiko is said to be positioning himself to become the ruling party’s official bet for the top post in Quezon City.

Given how political winds can change in a second, the Belmontes just appear to be making the most of their closeness to the Dutertes to ensure Joy will have the upper hand in the mayoralty race.