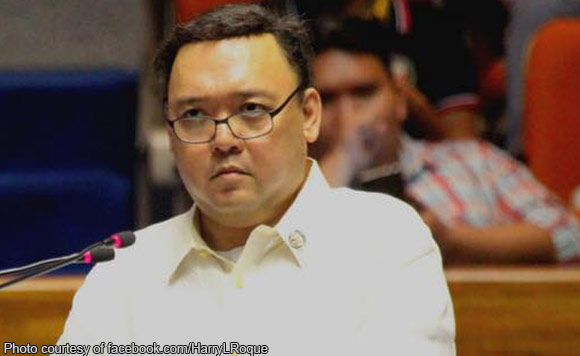 Akbayan partylist Rep. Tom Villarin on Thursday refuted the claim of presidential spokesperson Harry Roque that it would be the International Criminal Court’s loss if the Philippines withdrew from the Rome Statute, as other countries were likely to follow suit.

On the country, the Philippine withdrawal will deal a blow to the country’s international standing, the Magnificent 7 lawmaker said.

“The withdrawal by President Duterte of the Philippines from the International Criminal Court is not a big loss to the ICC but a big blow to our good standing in the international community,” Villarin said.

“The Philippines for long is seen as leading beacon in the defense of human rights and for promoting the rule of law. Unfortunately under Duterte, we have bottomed out and stooped to the level of a rogue state,” he said.

“Duterte’s withdrawal puts him in the same league of brutal dictators in some African countries which also defied the ICC after preliminary investigation found evidence to prosecute them for crimes against humanity,” Villarin said.

He noted that the move by President Duterte “actually makes us the second country that ratified the Rome Statute to withdraw. Last year, Burundi which also ratified the treaty withdrew by a vote of their parliament.”

“Roque’s projection that more countries will withdraw from the ICC is just a figment of his imagination. Last year, the threat of African countries to withdraw never gained ground. Either they ousted the dictators or their courts ruled otherwise. It also showed these countries see the Court as an extension of their commitment to greater accountability for gross violations of human rights and international crimes,” Villarin said.

“Likewise, under the Rome Statute, crimes in non-member states can still be referred for investigation to the UN Security Council which the UN Commission of Inquiry into Burundi did after preliminary investigation found evidence of EJKs, disappearances, arbitrary arrests and detentions, and sexual violence. It also happened to other non-member countries. The same would likely happen to the Philippines,” he said.