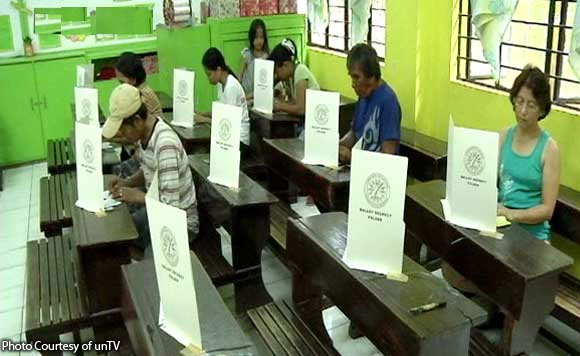 0 1,810
Share
Want more POLITIKO News? Get the latest newsfeed here. We publish dozens and dozens of politics-only news stories every hour. Click here to get to know more about your politiko - from trivial to crucial. it's our commitment to tell their stories. We follow your favorite POLITIKO like they are rockstars. If you are the politiko, always remember, your side is always our story. Read more. Find out more. Get the latest news here before it spreads on social media. Follow and bookmark this link. https://goo.gl/SvY8Kr

The House of Representatives on Wednesday approved on second reading a measure seeking to postpone the May 2018 barangay and Sangguniang Kabataan (SK) elections to the second Monday of October of this year.

The lower chamber, through voice voting, passed House Bill 7378, which seeks to move the schedule of the barangay and SK elections from May 14, 2018 to October 8, 2018.

The second reading approval came two days after the bill hurdled the House committee on suffrage and electoral reforms.

ACT Teachers Rep. Antonio Tinio and Buhay Rep. Lito Atienza were the only interpellators during the period of debates at the plenary.

Under the bill, all incumbent barangay officials shall remain in a holdover capacity, unless sooner removed or suspended for cause, until their successors shall have been elected and qualified.

The bill also provides that subsequent elections shall be held on the second Monday of October 2021 and every three years thereafter.

Oriental Mindoro Rep. Reynaldo Umali, one of the principal authors of the bill, said postponing the barangay and SK elections this May would give Congress more time to determine the proper structure of the government when it transitions into a federal system.

The House leadership has earlier planned to submit the proposed new federal charter as a referendum or plebiscite simultaneously with the scheduled barangay and SK elections in May 2018.

“Considering these circumstances, the schedule is too cramped if the elections will be held simultaneously with the plebiscite for the proposed Federal Constitution,” Umali said.

On their part, Senate leaders said they might not have enough time to approve the polls postponement considering that Congress would go on Lenten break on March 23 and would resume session on May 14. (PNA)